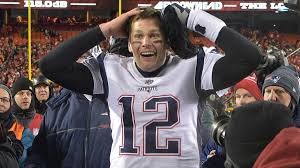 Former NFL safety Bernard Pollard is probably best known for a Week 1 incident in 2008 where, while playing for the Kansas City Chiefs, he swooped into the Patriots backfield and ended Tom Brady’s season almost before it began. Pollard tackled Brady, tore his ACL and snuffed out the Patriots’ attempt to run back their undefeated regular season from the year before.

It should be no surprise that Pollard is one of the most disliked athletes in Boston over the past few years. Which means his decision to call Brady the “clear cut No. 2” quarterback of all time and a “system” quarterback should go over very well in Boston.

NFL.com ranked the greatest quarterbacks of all time and, naturally, put Brady No. 1. He’s the undisputed top quarterback of all time. Unless you’re Pollard, who would actually lean toward Peyton Manning based on the reply he sent to the league’s social media account on Twitter.

Y’all crazy! Peyton is #1 no doubt! Can’t go by rings. The things he did on two different teams are mind blowing. Tom Brady is clear cut #2. Tom has played in a system that works (no doubt he’s been special), Peyton WAS the system.

— Bernard Pollard Jr (@Crushboy31) July 3, 2019
One of Pollard’s nicknames while he was playing, along with “Bonecrusher,” was “Patriots Killer.” It grew out of his hit on Brady as well as him briefly knocking out Rob Gronkowski in the 2011 AFC Championship Game. Pollard is clearly not a fan of the Patriots either. He does not, however, appreciate how Patriots fans feel about him.

To ALL the Patriot fans that call me a “cheap shot artist.” In 5 games playing against the Patriots this is the ONLY flag that was thrown against me. After the appeal the @NFL said “play was clean.” Y’all try again. #therealhitstick pic.twitter.com/d9E2pZDlUi

— Bernard Pollard Jr (@Crushboy31) July 5, 2019
He didn’t play with Manning, so at least there’s not a next-level bias creeping in here, but clearly there is some bias.

Does he have a case for this? Well, not really. I think you can make a case that if the Earth rotates a little bit differently on its axis over the history of time that Manning could be considered better than Brady. He has the résumé for sure: the passing yards (71,940), passing touchdowns (539), MVP seasons (5), Super Bowls (2), All Pros (7) and Pro Bowls (14) speak for themselves.

There was a time when Brady was the “super clutch game manager” and Manning was the statistical monolith of the NFL for the better part of a decade. Brady flipped everything with the 2007 Patriots — ironically, since he didn’t win the Super Bowl that year — by shattering records.

And when Manning re-emerged in Denver putting up cartoon numbers with the Broncos after being overly ceremoniously dumped by the Colts, Brady countered by ripping off a bunch of Super Bowl wins in the late stages of his career, including the ridiculous 28-3 comeback against the Falcons that saw him shatter records he would break the next year in a loss to the Eagles.

The “what if” scenario that would propel Manning above Brady? It’s basically asking for like 10 plays to be changed. One, the onside kick and/or the Tracy Porter pick six by the Saints needs to be flipped so Manning has three titles (although you could argue if he wins a second with Indy they won’t let him go, but just play along). Two, Brady needs to lose to the Falcons (very doable), Seahawks (VERY doable) and maybe the Panthers (totally doable) early on in his career.

If he and Manning both had three rings and Brady was 3-6 in Super Bowls, imagine how the narrative would shift. Again, asking a lot, but we’re only talking a few plays here and there if you wanted to change the argument.

As far as the “system” portion of the program, well, it’s tough to call Brady that.

.@jerrythornton1 He is a system QB. Period. Let’s talk about it. I think @Pardonmytake would be a good spot. What do you think @barstoolbigcat @pftcommenter @barstoolsports ? Oh, and @ me next time. https://t.co/fHmnSrXTzp

— Bernard Pollard Jr (@Crushboy31) July 3, 2019
EVERY quarterback operates a system and some are better at it than others. I don’t think that the term, which is traditionally considered disparaging, applies to Brady in the way that it normally would. Usually we’re talking about an offensive scheme and system.

What I think Pollard might mean is that by landing in New England with Bill Belchick and the SYSTEM that he put in place (i.e. the structure, etc), Brady benefited greatly. There’s not doubt about that. But Belichick’s system probably doesn’t exist without a quarterback like Brady buying in, taking less money over the course of his career and setting the standard for how the Patriots operate.