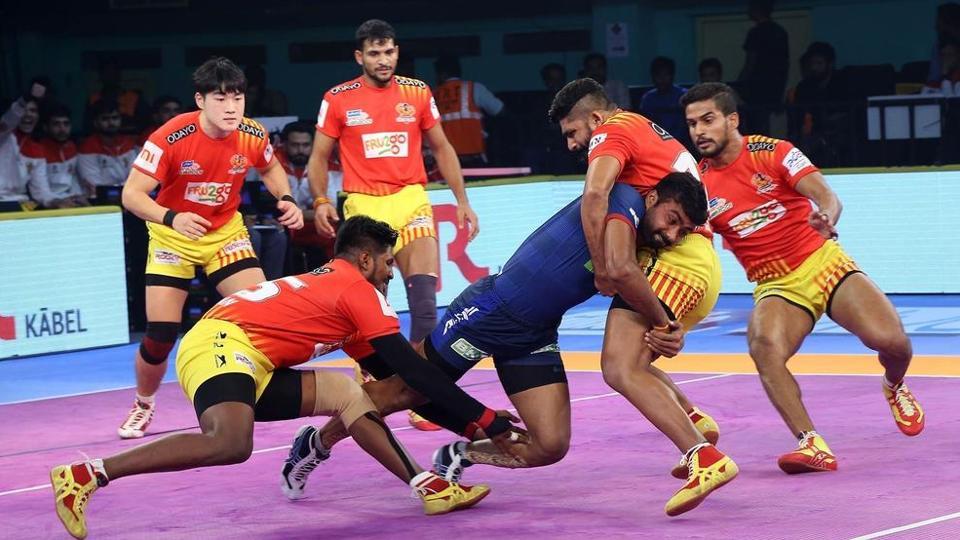 Raider Monu Goyat, who hails from a small village named Kungar in Bhiwani district of Haryana, rose to prominence when he finished season 5 with 191 points for Patna Pirates. He was a key figure in taking Pirates to the title, and hence, Haryana Steelers bid a hefty sum of Rs 1.51 crore, the then, highest in PKL auction history. But the season for Haryana did not turn out as planned.

“Our team Haryana Steelers performed good. But in a competition, there will always be ups and down. There were some players who were injured, including me. And hence, we kept on losing games, and failed to reach the playoffs. But this year, I am fully fit. My new team is also fit, so we hope to perform better,” Monu told Hindustan Times in a brief chat.

The 26-year-old has been bought by UP Yoddha this season, and he believes he is fit to repeat his season 5 performance. “Last year, I was injured. After the injury, I consulted a physiotherapist and got treatment. Now I am fit and feeling better in the training sessions. The coach is making us do lot of exercises. I hope to repeat my peformance from season 5 this year again.”

Speaking on what makes UP a dangerous side this year, the athlete said: “We have three powerful raiders this year – there is Shrikant Jadhav on the left, there is Rishank Devadiga on the right. I am there as well. So, we will make the most of having three heavy raiders this year. If one raider fails to perform, even then we have strong back-up. The bench strength of raiders also looks good this season.”

Since joining PKL, Monu has not spent more than one season in a franchise. But he feels he has a good chance of winning the title for UP. “Even though my team has changed – I have played before with these players. We all are friends. I don’t feel that it’s a new environment, despite new teammates and coaches. I hope to get off to a good start this year. Because we have nice combinations of raiders and defenders. So, I hope I can take the team to the final.”

Monu started playing kabaddi since he was in fifth standard. He says he has never thought about doing anything else but becoming a professional kabaddi player. He was introduced to the sport by his uncle Vijender Singh, whom he considers as his idol. “When I was young, people play kabaddi from before. My uncle Vijender Singh was good. He was selected in the Asian Games camp. Looking at him, and playing alongside him, inspired me to pursue the sport. He is my idol,” he said.

“My family supported me a lot – my elder brother helped me out a lot. I was weak in studies, so I started going to pursue the sport. So my family members told me to focus on kabaddi and not worry about the studies,” he added.

The raider recalled the struggles he went through in pursuit of fulfilling his dreams. “Kabaddi is very tough on professional level. It is important to have mental and physical strength. We have to train a lot. We watch a lot of videos and focus on our weak points. We have to workout a lot on the mat.When I started learning the sport back in my village, there were not too many facilities available. We belong to a middle-class family. We used to get injured in the village, so we used local medicines to get treated.”

Speaking on his rising fandom, Monu said: “It’s great that when we reach the top from a very low level. The love and support from the fans make me more excited and motivates me to perform even better.”