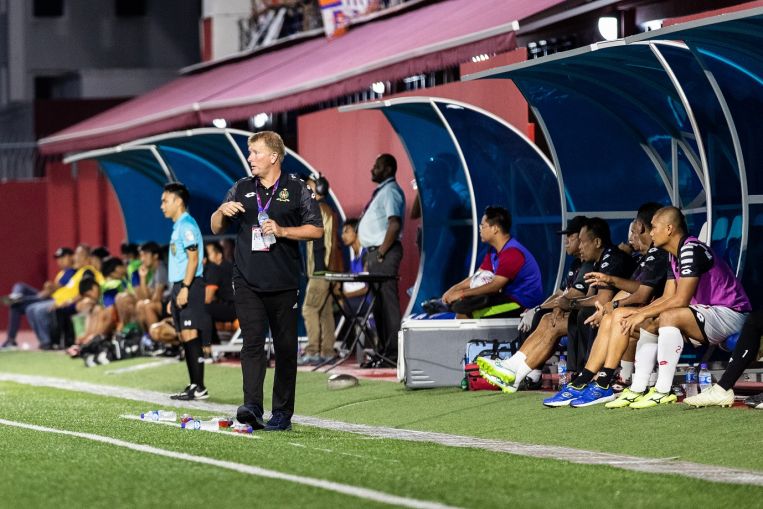 SINGAPORE – They have nine games left in the Singapore Premier League (SPL) and Brunei DPMM coach Adrian Pennock’s table toppers are ready to dig deep as they bid to recapture the title they last won in 2015.

With the Wasps meeting the Cheetahs on Friday (July 19) night, that eight-point gap could well become just five should they stumble at the Jalan Besar Stadium.

However, Pennock said that he is relaxed about maintaining DPMM’s lead in the nine-team table.

“Nobody expected us to win at the start of the league. Now we are just taking one game at the time and enjoying the moment.”

DPMM also lead the SPL table on other fronts. Former Belarus international striker Andrey Varankou leads the scoring chart with 14 goals in 15 games, six ahead of teammate Australian Blake Ricciuto, who is his nearest challenger.

Varankou also has the most assists (eight) in the league while goalkeeper Wardun Yussof has kept the most number of clean sheets (seven).

Pennock said: “The goals from Andrey and Blake, and the number of clean sheets our defence kept have helped collectively. (Midfielder Hendra) Azam is suspended, which is a big blow for us and we know Hougang are a good side.

“They had a fantastic result against Albirex (2-1 win last Saturday) and that will give them a lot of confidence. Hopefully, we’ll turn up and provide an entertaining game.”

When asked if he is wary of any Hougang player in particular, Pennock replied: “There are 11 players on the pitch and seven on the bench, so we are going to watch for them all.”

The Englishman, who was formerly assistant to Tony Pulis at English side Stoke City, talked up his side’s spirit and said it was a key factor to the team’s success.

“The team spirit has been fantastic. We work very hard for each other and there are no individuals in the team,” he said.

“I beat them in head tennis every day, but the local players taught me a lot especially during the period of Ramadan and Hari Raya, in terms of their culture and mental strength.”

Hougang coach Clement Teo is also in bullish mood ahead of the big clash. He said: “We know we will be coming in as underdogs, but we will show what we can do.

“Football is strange. When DPMM played Tampines Rovers, they were not playing as well and got beaten.

“It shows that it all depends on the day itself and each team are capable of beating any other team.”