Football: Manchester United must make most of fresh start after letting themselves down last season, says Bryan Robson 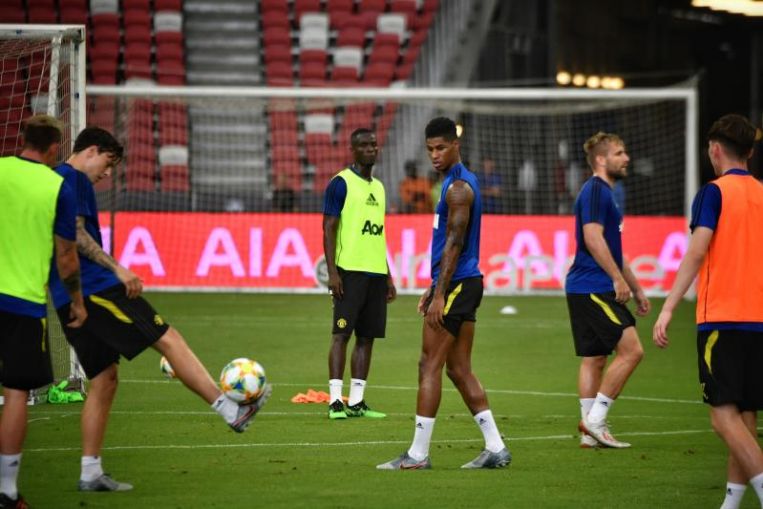 SINGAPORE – Inside a little motor garage in Ubi on Saturday (July 20) afternoon, a Manchester United legend dropped pearls of wisdom.

And, on the sidelines of a meet-and-greet at automobile store Autobacs, former Manchester United skipper Bryan Robson – revered as “Captain Marvel” by the club’s faithful – said he believes the United squad is good enough to finish in the top four of the English Premier League and earn a return to the Champions League next season.

Making an appearance at the store at the invitation of one of United’s global partners Gulf Oil, Robson, 62, said: “There are loads of good players in the squad now.

“The thing about us is that we let ourselves down last season.

“So this season it’s a fresh start really with Ole (Gunnar Solskjaer, United manager). The players know that they’ve got to do better than what they did last year.

“With a couple more new signings, I think we’ll be in good shape to try and compete to get back into the Champions League.”

Solskjaer, who was named permanent manager of United in March after a bright run as caretaker manager, guided the team to only a sixth-place finish after a limp end to the season.

The Norwegian said last week that his team needed a leader like Robson was, and, while he was flattered by the praise, the former England midfielder said there are potential “Captain Marvels” already in the United squad.

Suggesting the likes of defenders Chris Smalling, Phil Jones and Eric Bailly as unpolished leaders, Robson, who played 461 games for United from 1981 to 1994, said: “Some of the boys are capable of doing this, but they need to communicate and drive their teammates on if they want to get the best for themselves and the best for the teammates.

“I think this squad at this moment of time, is quite a quiet team and don’t demand enough from each other.”

Another candidate as leader, said Robson, is the polarising France international Paul Pogba. The 26-year-old has made comments in pre-season suggesting he would like a move away from United, something that has been vocally echoed by his agent, Mino Raiola.

Paul Pogba has produced inconsistent displays despite scoring 31 goals in 142 appearances in all competitions.
Related Story
Football: Paul Pogba must put his head down and focus on pre-season, says United great Bryan Robson
Related Story
Football: United must hit the ground running in new season, demands Ole Gunnar Solskjaer
Related Story
Football: Former Red Devil Dimitar Berbatov says Harry Maguire will be a ‘good fit’ for United
Describing Pogba as a “player you don’t want to lose”, Robson slammed Raiola and said: “I think players listen far too much to agents and instead of deciding what they want to do with their career.

“I (am) trying to put it in Paul’s head: make your own decision. Don’t allow an agent to make a decision on how you want your career to go.”

Robson said he engaged an agent himself only in 1982, when AC Milan, Juventus and Sampdoria wanted to sign him, but he turned them down.

“My agent didn’t try to persuade me into signing for any of them,” said Robson.

Robson added he has been encouraged by the way Solskjaer has fostered a “happy camp” among the United players in pre-season so far, and hailed the manager’s courage in blooding youngsters like Mason Greenwood, James Garner, Tahith Chong and Angel Gomes into the first team since he took over.

“At United, we’ve always had the ambition to bring kids through the ranks and give them an opportunity, and it seems as if we’ve gotten back to that at this moment in time,” said Robson.

When asked what advice he would give the youngsters trying to establish themselves in the first team, Robson said they should “enjoy yourself and keep your feet on the ground”.

After a short pause, he added with a grin: “And remember that you get your reputation from being a footballer, not being on social media all the time.”

When asked if Robson in his prime would give some of the current first-team United players a kick up their backsides for being on social media too much, he said: “If we’re not getting the results and not getting performances from certain people, then yeah, I’d have a go and say: ‘You’re thinking far too much of your social media, get back to your football’.

“But it wouldn’t be just me saying that, it would be Sir Alex Ferguson saying that as well.”