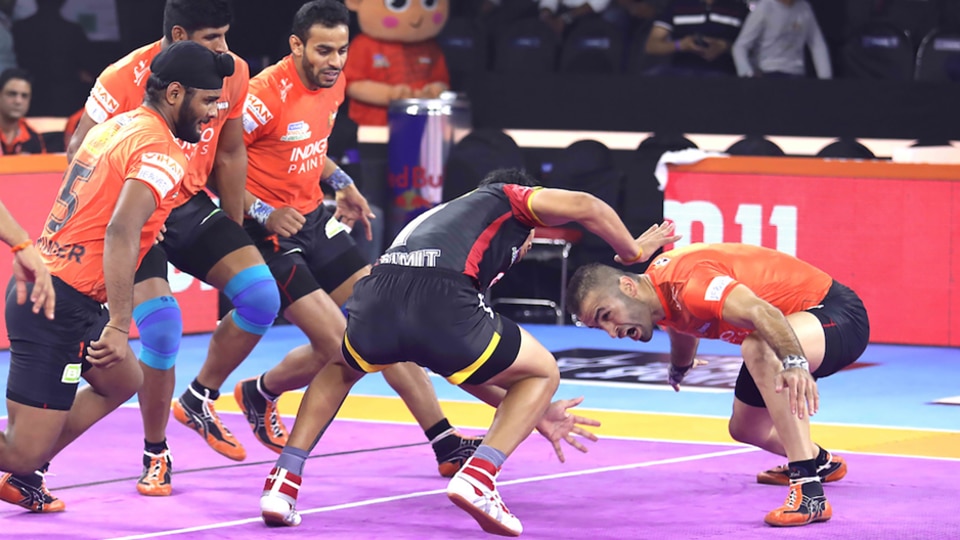 Wrestling is steeped in Iran’s psyche. The oldest sport in the country has given its oldest folk heroes, none more famous than Rostam, whose exploits were immortalised by Ferdowsi in Shahnameh, the longest epic poem by one person, which Matthew Arnold based for his moving 1853 poem Sohrab and Rustum. From traditional koshti to modern-day wrestling, Iran’s success story in the sport is etched on its 43 Olympic medals. And wrestling is also the root from which kabaddi has sprouted and is spreading wings in Iran. A major breakthrough came last year when Iran dethroned India as Asian Games champions, especially the men who had ruled since kabaddi’s inception in the 1990 edition.

Kabaddi has traditionally been dominated by South Asian nations, but others are catching up. While Korea challenged Iran for gold in Jakarta last year, Japan won bronze in 2010 and China were semi-finalists once. The switch from mud court to synthetic mat has popularised kabaddi, attracting more TV. This Pro Kabaddi League edition reflects the distance the sport has come—players from Korea, Kenya, Thailand, even USA, besides Iran, are playing while Japanese players have also featured.

That Iran players are hot property is clear. PKL features 15 players from Iran, up from eight last season, the largest group from one foreign country in the league. And its national coach guides one of the teams.

Breaking the stranglehold of seven-time champions India at the Jakarta Asian Games was no fluke. While Indian men were pushed to bronze, Iranian women too triumphed, toppling India in the final. Iran’s rise has been evident for a while, but it caused ripples, especially in India as it lost two sure-shot gold medals.

The process of challenging powerhouse India though had started for Iran well before it entered the Asian Games. The first step was to catch ‘em young, making converts of aspiring wrestlers. The scouting began as early as 1996, the year the national federation was formed. And the northeastern province of Golestan was a fertile ground.

“Kabaddi is similar to wrestling—the holds, the locks, the agility. In Iran, everyone knows the technicality of wrestling and it formed the base for kabaddi. My city Gorgan (capital of Golestan) is the heart of kabaddi. Most players come from my place,” Abozar Mohajermighani, who was in the victorious 2018 Asian Games team, said. “Kabaddi is easier to learn if you know wrestling. I would tell my students to practise wrestling one day and play kabaddi the next. It makes you fitter and stronger. You can’t play kabaddi if you don’t have a tough body.”

Mohajermighani was fond of wrestling in his formative years as a sportsperson. But Meraj Sheykh, 31, was a professional wrestler for almost a decade before switching to kabaddi. It shows kabaddi’s growing popularity in Iran, and the confidence of athletes they can make a career in the sport.

“From the current squad, I am the only player who started in wrestling. People think it’s a simple game of tag, but it’s more than that—the 40 minutes we spend on the mat requires presence of mind and skill-sets for which we train through the year,” Sheykh said.

“Initially, only two or three provinces played kabaddi. Now, almost all the states have a team. They play in Iran’s national league,” Gholamreza Mazandarani, Iran’s national team coach, said. “Now, kabaddi is played in schools too.”

Though wrestling is Iran’s national sport, football is the most popular. Iran boasts of one of the best teams in Asia and football provides a chance to excel in sport, even play abroad. However, kabaddi has opened another door to move up the social order.

“After football, basketball, volleyball and handball were preferred. Kabaddi is slowly coming up. The money too is good, especially for those in PKL,” said Mazandarani, who is also head coach of PKL team Telugu Titans.

Among the current Iran team players, Mohajermighani was picked by Telugu Titans for R75 lakh while Mohammad Nabibaksh was the most expensive foreigner at R77.75 lakh, bought by Bengal Warriors. Mohammad Esmaiel Maghsodhu went to Patna Pirates for R35 lakh.

“We now don’t have to explain the sport to our parents. The money some of these players are getting has helped raise kabaddi’s popularity,” said Mazandarani. “Earlier, parents were intent on sending their kids to play football. It’s only natural because it has a more structured approach. But the price players are attracting is helping kabaddi to spread.

“Earlier, Golestan was always expected to win the national league. Now, it’s not like that. Every state has a good team, the 15 players here are from 10 different cities,” added Mohajermighani.

Iran’s impressive show against India in the 2014 Asian Games final saw an upsurge in kabaddi’s popularity. Iran led till half-time but India rallied to win 27-25.

“That match was crucial as it showed Iran could challenge a strong team like India. Our growth has been rapid. We first competed at the 2006 Doha Asian Games where we did not win a medal (Iran were fourth). But in the next three editions, we reached the final,” Mazandarani said. “We need to improve our skill; we’re good physique and fitness-wise. For that, we need exposure playing with stronger teams. PKL is giving that.”

Fazel Atrachali, who was bagged by U Mumba last year for R1 crore, says despite growth in the sport, Iran’s professional structure is yet to become top notch.

“You play with good players, and top players (of Iran) save what they learn and teach the next generation. (But) during the national league, 70 percent of the seats are empty sometimes. The following is improving but more is needed,” said Atrachali, who was in the 2018 Asian Games team.

For now, it is an upward curve.

“Nowadays I get hundreds of requests from youngsters on Instagram to share the highlights of kabaddi matches. PKL is not broadcast in Iran but still has a good following, mainly through Youtube. Earlier, in the Asian Games, one or two countries would play the final (versus India). But last year, Iran and Korea played the final. You can see what a little push can do for the sport.”