How difficult is it to be a woman footballer in India? Indian football’s wonder girl Dalima Chhibber narrates 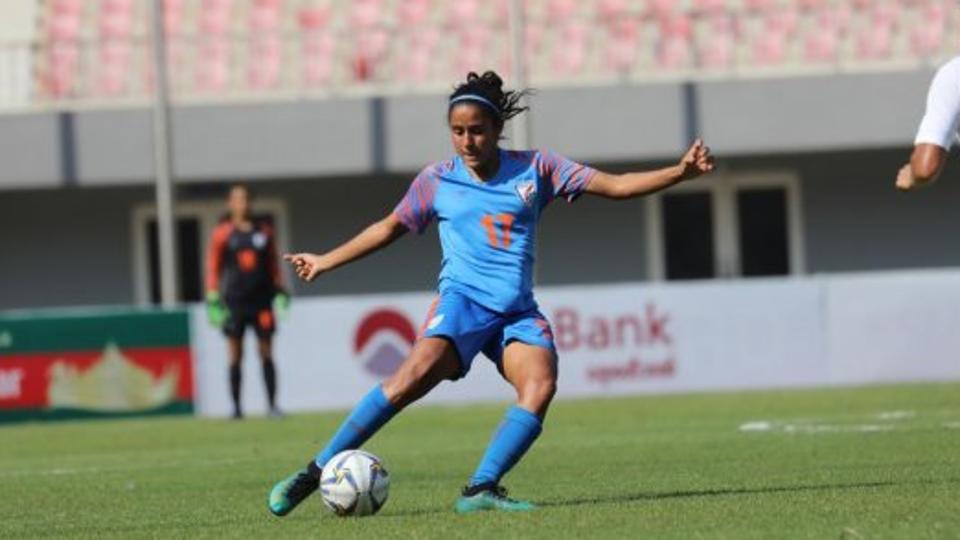 Playing for India Rush Soccer Club in the second season of Women’s I League in 2018, Dalima Chhibber gathered limelight for scoring a 40-yard screamer. IRSC was trailing 1-0 down against Indira Gandhi Academy for Sports and Education, when the 20-year-old Dalima, who had played six games in Indian jersey as a midfielder and a full-back till that time, decided to take a shot from the distance. The ball flew over the goalkeeper’s head to go straight into the back of the net.

A year later, she repeated a similar goal from a set-piece in the Women’s SAFF Cup fixture against Nepal. The two long-range goals went viral on the social media, making her the buzz of the town.

“I used to train for long-range goals with my coach and my father ever since I started playing football. I have been scoring such goals since I was in school. It is now, with the help of social media, they are starting to get recognised,” the young footballer said on the sidelines of Subroto Cup 2019 Inauguration event in New Delhi.

“There is definitely a technique behind it- you need to know which direction you need to go, whether you need to hit it sideways, or hit it straight. It comes with practice,” she added.

Dalima made her India senior women’s team debut at the age of 17 in the 2016 South Asian Games. In her short career, she has displayed talent of playing at multiple positions. For India U-14 and U-16 side, she played as a striker. In the senior team, she played as a central midfielder, then moved on to become the right-back. Recently, she was handed in the captaincy reigns and was used a central defender in the Indian side.

“The playing role automatically comes down to the coach’s decision. I leave the decision to the coach where I fit into the team. What matters to me is to be on the field and play,” she said.

For a footballer who can adapt to various positions on the field, it is surprising to know that it was not her first calling. As a child, Dalima wanted to pursue athletics. She used to run tracks and train for athletic events at her father’s football academy. She even won a medals in 100 m and 200 m at state and zonal levels. Football with the boys at her father’s academy was her means of break from her athletics training.

Later, when she was 11 years old, she accompanied her sister to a Delhi U-19 football state team trial. She was juggling and playing around with the ball at the tracks when the coach called her inside. Her father, worried that she might have been injured, went with her. Over there, the coach informed her that she has been selected in the playing XI for U-19 Delhi team.

“That was the moment I realised I can take up the sport. It was my first professional tournament, and I started taking interest in it as I played alongside teams from different states. When I got to play for India in the U-14 tournament, I knew I wanted to play for the senior team one day,” the footballer said.

But pursuing the sport was not easy for her. At the time, there were not many female footballers available, so Dalima had to train along with boys. Some of her relatives were not supporting either, wanting her to go for athletics, which is an individual sport. “Once at a family gathering, I overheard someone telling my father that ‘your daughter is a footballer, what she can achieve in this line’. That was after I had already represented India in the U-16 tournament,” she recalled.

But over the years, the footballer learnt how to block the demotivating voices surrounding her. “Recently, the Indian football team had posted a picture of me and Indumathi together. Some guy had commented, ‘they are just going to comeback and be in the kitchen’. Such comments are demotivating at times. But I have learnt to focus on my sport, and not pay too much attention. I feel my entire career has been about proving women can play football,” she said.

In March this year, FIFA President Gianni Infantino announced India as the host for the upcoming U-17 Women’s World Cup in 2020. India hosted the men’s edition of the competition in 2017, in which the young blue brigade failed to register a single win. There appears to be hardly any setup for women’s U-17 team, and it seems, India might suffer a similar fate next year.

“Realistically speaking, you cannot prepare a team in one year. The federation is trying to put it together and trying to send the players for exposure trips before the big tournament,” Dalima said.

But are exposure trips enough to form a team and compete against some of the best footballing nations in the world? “I feel playing with teams across countries, a team gets the competitive experience and environment that it needs to build. The senior team was given three-month exposure trip recently and we showed a lot of improvement afterwards. We drew with Myanmar 3-3, a team which is at 44th rank. We were one of the top teams in Olympic qualifiers and we were eliminated because of the goal difference. That speaks a lot,” the 21-year-old added.

In July, Dalima, who had been away from the Indian football team explained the reasons for her absence. In a video uploaded on Twitter, she said that she is moving to Canada to pursue her higher studies in Sports Psychology. She would also be continuing with the sport for a top-tier varsity football team, while pursuing her studies.

“I am exposing myself more to the sport in Canada – the hub of women’s football. I have got 100 per cent scholarship to study on the basis of my performance. If I get to play with experienced players from all around the world, and I can manage my academics, it will develop me better as a player,” she explained her decision when asked.

Another reason for Dalima’s big move is the financial aspects of women’s football in India. Recently, at the Women’s football World Cup in France, a huge buzz was created over the issue of wage gap between men’s and women’s sport. The Indian footballer, who was part of the Sony Network broadcast panel during the tournament, insisted that it will take a long time for the issue to resolve in India.

“Tackling wage gap is a far-fetched goal in India at the moment. This is why I decided to move to Canada rather than playing for a club in Europe. Traveling to Europe is expensive. I did not receive much financial support from the sponspors or stakeholders when I asked out. I can see future as a footballer, but football cannot sustain me in the future. Hence, I decided to complete my studies because it is important to financially sustain yourself when playing football,” she signed off.