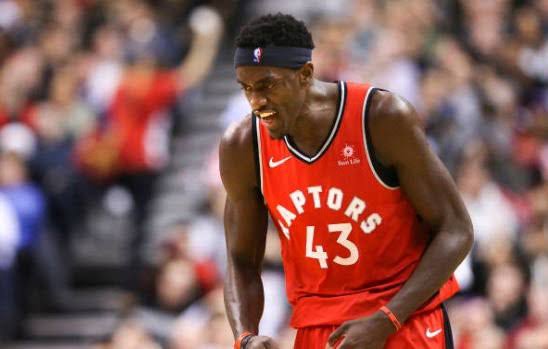 Raptors have their new face of the franchise.

Pascal Siakam has agreed to a four-year, $130-million maximum contract extension to keep his talents in Toronto through the 2023-24 season, according to ESPN’s Adrian Wojnarowski and Zach Lowe. With the extended term and significant dollars secured just ahead of the Oct. 21 deadline, the winner of the 2018-19 Most Improved Player award now carries the expectation of growing into an All-Star and more.

According to The Athletic’s Shams Charania, there are no team or player options in the deal.

4,257 people are talking about this

For Toronto, this is another important piece of business on the back of losing Kawhi Leonard and Danny Green in free agency. With Kyle Lowry’s services also having been secured through the 2020-21 season, the team is certainly taking the retool rather than rebuild route.

From unheralded rookie to Spicy P

Just three seasons ago, this would have seemed impossible for the 27th overall pick in the 2016 NBA Draft. There Siakam was, struggling to keep his head above water on an NBA court, the game happening way too quickly to keep up with rotations on the defensive end, and his skills far too raw to make any kind of impact in the halfcourt on the offensive end.

He wasn’t meant to be in that position so soon, either. Jared Sullinger was slated to start the 2016-17 season at power forward for the Raptors, but foot surgery right before the season meant that Siakam was inserted into the lineup with the hope that he wouldn’t be a deer in the headlights. Through his first 48 games — 38 of which were starts — Siakam averaged 4.4 points and 3.5 rebounds. In 365 minutes alongside Kyle Lowry, DeMar DeRozan, DeMarre Carroll and Jonas Valanciunas, the team played to a minus-12.2 net rating, allowing a shocking 117.7 points per 100 possessions.

Siakam saw very limited time with the senior club in the second half of the season and was sent to Mississauga, Ont., to work on his game with Raptors 905. He blossomed during his time there under Jerry Stackhouse’s watch, finishing with the G League Finals MVP award and leading the 905 to their first championship.

He carried that momentum into the 2017-18 season, becoming an integral member of the Bench Mob, a secondary unit that ran teams ragged with an infectious, unselfish style of play. Siakam’s athleticism was always evident, but his work ethic, desire to improve, and growing feel for the game became important aspects of his development.

Unwilling to stop there, though, Siakam then rose to prominence after the arrival of Kawhi Leonard. For the 2018-19 season, Siakam averaged 16.9 points, 6.9 rebounds, 3.1 assists, and just about a steal per game while shooting 36.9 percent from 3-point range. In the final game before the All-Star break, he scored a career-high 44 points in a thrilling win over the Washington Wizards.

There were still questions being asked of how he would adjust to playoff defenses keying in on him, but he answered all of them with an impressive playoff run. Playing Robin to to Kawhi’s Batman, Siakam recorded nine 20-plus point performances to go along with a pair of 30-point nights while matched up against defenders ranging from Jonathan Isaac to Joel Embiid to Giannis Antetokounmpo to Draymond Green. His two most memorable nights came in the NBA Finals, first in Game 1 when he scored 32 points on a stellar 14-of-17 shooting, and then 26 in the championship-clinching Game 6 to go along with 10 rebounds and three assists. 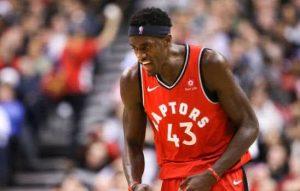 Again, keeping hold of your best assets is vital in the NBA, so signing Siakam to a long-term extension — someone who has rapidly improved with each passing year — is a no-brainer. Having secured his services, the Raptors can now see over the next couple of years whether or not he can handle double-teams on a nightly basis, the pressure that comes with being the No. 1 option, and ultimately grow into the top-tier difference maker needed to win a championship.