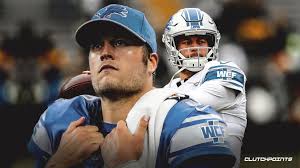 Will Stafford make the Hall of Fame?

Stafford has been one of the most consistent quarterbacks since going No. 1 in the 2009 draft, but his name is rarely mentioned with the likes of Brady, Brees and Rodgers, let alone Ryan. He has yet to win a playoff game and entered Sunday with a career 68-77-1 record.

Stafford has benefited from playing with an all-time great receiver in Calvin Johnson and at the weather-protected Ford Field. Furthermore, the Lions are so often trailing that he is able to rack up a lot of passing yards in garbage time when other quarterbacks would spend running the ball to eat clock.

All of this is not to say that Stafford is bad. Only 21 signal-callers have ever reached 40,000 yards, and the only players who are retired and not in the Hall of Fame are Peyton Manning (who is just waiting for eligibility), Carson Palmer, Vinny Testaverde, Drew Bledsoe and Collins. Palmer may seem like a similar comp as a fellow No. 1 pick, but Stafford is going to blow by his career passing stats, which will likely make his statistical resume too strong to pass up on.

Michael Jordan once told Kobe Bryant he could ‘never fill’ his shoes, and he remembered
J.J. Watt hopes players who opt out aren’t criticized for it