Nigerian Footballer, Sani Emmanuel Reveals What Forced Him Out Of Soccer 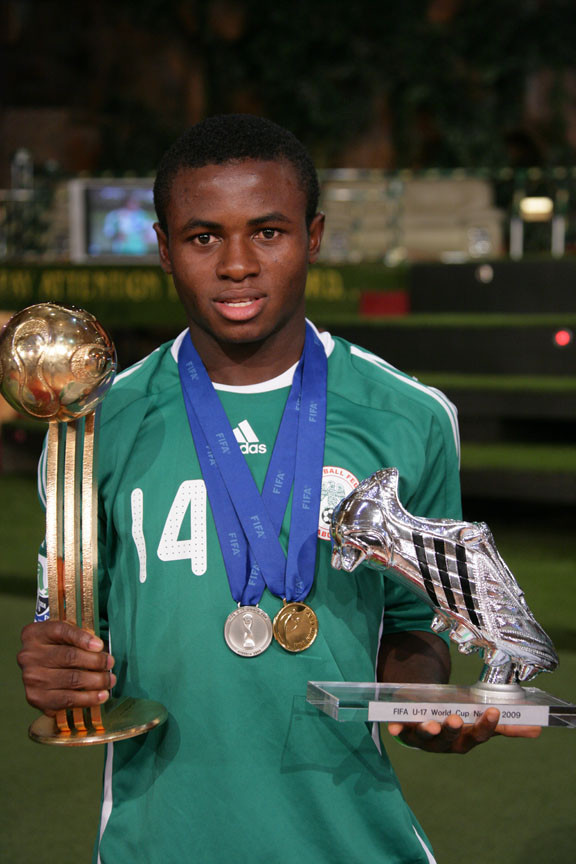 Former My People FC kid wonder, Sani Emmanuel, has revealed his reasons for quitting football after emerging as one of the brightest stars when Nigeria hosted and reached the final of the 2009 FIFA U-17 World Cup- but lost to Switzerland by a lone goal.

Many had expected Emmanuel to become a superstar after coming from the bench to score five goals and won the Golden Ball award in 2009- but while many of the other youngsters, including Nigeria’s Kenneth Omeruo, have gone on to stardom, the tournament’s highest goalscorer has disappeared into obscurity.

In 2009, he attracted interests from Chelsea and Tottenham Hotspurs in England but only got his first signing in 2011 at Lazio alongside Ogenyi Onazi, where he was immediately put into their Primavera side.

Then in 2012, it was announced that Emmanuel had signed for U.S. Salernitana 1919 of the Lega Pro Seconda Divisione on a co-owned basis from Lazio and on 9 September 2012. He made his only appearance for the 4th tier Italian side against Chieti Calcio in which he came on in the 58th minute for Christian Chirieletti as Salernitana suffered a 4–1 defeat that day.

Then on 16 February 2013, it was announced that Emmanuel had signed with Swiss Challenge League side FC Biel-Bienne on loan for the rest of the season. He then made his debut for the club on 16 March 2013 against Wohlen in which he came on in the 72nd minute for Ramon Egli as Biel-Bienne lost the match 1–0.

On 12 May 2013, Emmanuel scored his first professional goals in a league match against FC Wohlen in which he scored a hat-trick to lead Biel-Bienne to a 7–0 victory. He then scored two more goals for Biel-Bienne on 30 May 2013 against FC Winterthur as the club 2–2.

In October 2014 Sani signed with Beitar Jerusalem. 3 weeks later, after playing only 24 minutes for the club, Sani was released by Beitar Jerusalem, with the club stating that the coach is not excited by Sani and that he does not feature in future plans.

After leaving Beitar Jerusalem, Emmanuel had a trial at Bosnian side, FK Sarajevo, but failed in his attempt. And since then Emmanuel has been forced to quit football.

Asked why he gave up football, Emmanuel told Leero Sports News: “I had problems with my feet, even during the tournament in 2009. If you remember, I often played in the second half because the pain was unbearable.

“After the World Cup, I could not play at all because I had pulled too much on the hamstring playing with pain. Then I had to stop my career. Even today, it still hurts on the front of the foot.”

“I tried to contact a lot of Nigerian international players, but I never got an answer and it was very difficult to cash.

“I returned to anonymity, without work, without anything. I wanted to set up an academy, but I never managed to get help and I’m still looking for it.

“I tried to contact them (the Nigeria Football Federation, NFF) so many times, but they told me to come home and get by on my own. They had other projects.”

On Wednesday, Emmanuel, called for support from Nigerians, adding that he had done one surgery with one to go.

“Please, guys I need your support. I have done one leg surgery and it was successful, 1 leg to go.”