Russell Westbrook, James Harden do not fly to Orlando with Rockets, will join team later 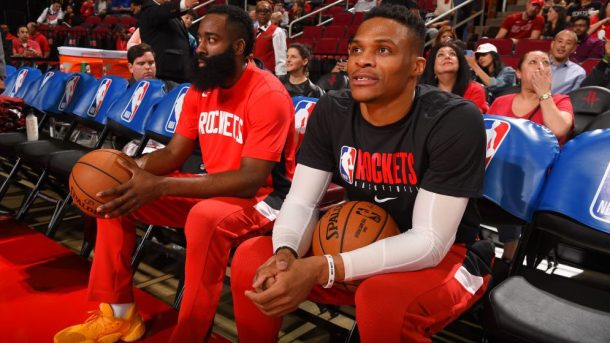 The Houston Rockets have landed in Orlando to be part of the NBA’s restart bubble.

Except for stars Russell Westbrook and James Harden. Neither was on the team’s charter flight from Houston, but both plan to join the team soon. Shams Charania of The Athletic broke the news, with the story confirmed by others soon after.

Houston stars James Harden and Russell Westbrook did not travel with Rockets today to Orlando and will join the team in near future, sources tell @TheAthleticNBA @Stadium.

Just-signed Luc Mbah a Moute and assistant coach John Lucas also did not fly with the team and will catch up soon, reports Jonathan Feigen of the Houston Chronicle.

Westbrook and Harden are not the only stars to delay their arrival in Orlando, the Clippers Kawhi Leonard did the same for personal reasons. The teams have agreed to this, but with limited practice time in the run-up to the eight seeding games, coaches want everyone in camp to work on rebuilding chemistry as fast as possible.

Coach Mike D’Antoni did fly with the team and was cleared to be in the bubble. D’Antoni, 69, was subject to extra consideration for entrance into the bubble by the NBA due to his age and the risk factors for people older than 65 with COVID-19.

Rockets coach Mike D’Antoni will be part of the Rockets traveling party to Orlando this afternoon. He said he did not anticipate any issues having provided the information the NBA sought.

The Rockets are one of the most interesting teams to watch in Orlando because of their all-in commitment to small ball — 6’5″ P.J. Tucker will play a lot of center. In the uncertain world of the NBA’s restart, that unconventional approach could get them upset wins. Or, they could get bounced early. There is no more high-variance team in Orlando than the Rockets.