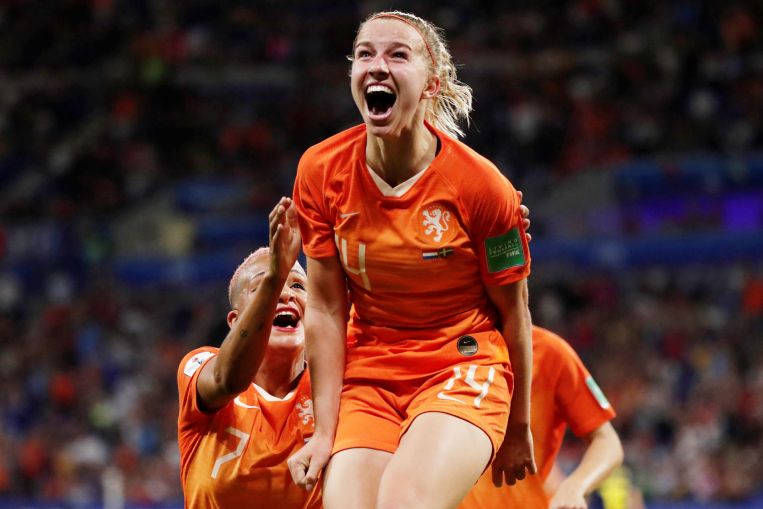 LYON • Jackie Groenen had not even managed a shot on target in the tournament before scoring the goal that took the Netherlands through to their first Women’s World Cup final on Wednesday.

Her long-range strike nine minutes into extra time in the 1-0 semi-final victory over Sweden in Lyon was just her third goal in 53 international appearances.

“I just saw a nice angle, and we’ve been saying for the last couple of weeks that I need to take more shots. The ball came really nicely so I just thought, ‘Let’s do it’,” said the delighted midfielder.

A bronze-medal winner as a youth at the 2010 European Judo Championships, Groenen, 24, is now looking to take the Dutch side to the top of the podium in France as they prepare to face the mighty United States in Sunday’s final.

European champions Netherlands are dreaming of winning a first World Cup in only their second appearance at the tournament. Only Germany and Norway have held both titles at the same time.

“It went through my mind as soon as I got off the pitch,” Groenen said of Sunday’s clash with the holders.

“They’re obviously a massive team, they have massive players, they’re the biggest team in the world, I can’t wait to play them.”

Wednesday’s game marked the first time a Women’s World Cup semi-final had gone to extra time and it proved a tight contest between the two sides, who last met in the quarter-finals of Euro 2017 when the Dutch won 2-0.

Unlike the “Total Football” for which the men’s team are famed, the Dutchwomen are a hard-working team who have struck late to win all three of their knockout matches, with a stoppage-time victory over Japan coming before two goals in the final 20 minutes downed Italy in the quarter-finals.

Getting this far is a remarkable achievement for the “Oranje”, but they will need to improve drastically if they are to stand any chance against the Americans.

“I think the potential has been in the Netherlands for a longer period of time but the facilities were not there,” said Dutch coach Sarina Wiegman, a former Netherlands midfielder who amassed more than 100 caps in a 14-year playing career, pointing to the start of the Dutch league in 2007 as the catalyst.

“It’s the whole development in the Netherlands and also the individuals that made bigger steps.

“Now they have been in a couple of tournaments, so they are very experienced too and they believe they can perform really well.

“It’s amazing to play in the final. It’s one match and anything can happen. We’ll prepare for that.”