Tennis: Serena’s search for the elusive ‘number 24’ goes on 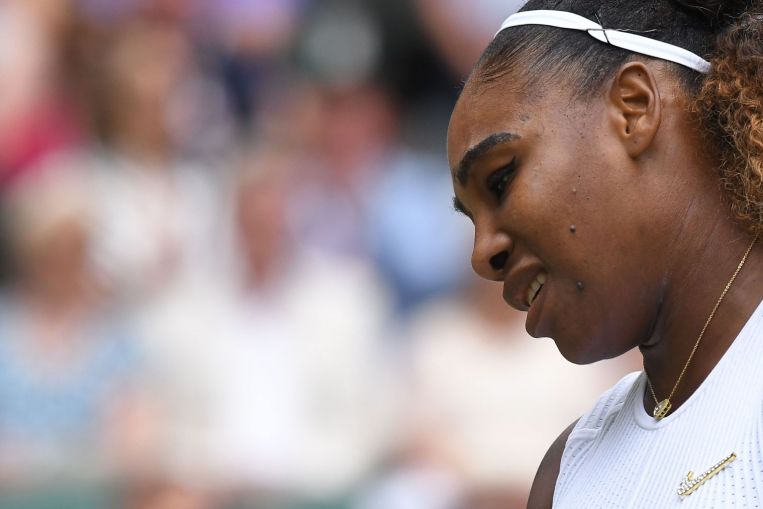 LONDON (REUTERS) – Just how badly things were going for Serena Williams in Saturday’s (July 13) Wimbledon final against Simona Halep was summed up by a booming plea that came from the crowd: “Wake up Serena!”

Williams heard the message loud and clear, but unfortunately for the American it was one of those days when nothing could save her from the 6-2 6-2 annihilation she suffered at the hands of Halep in 56 minutes.

A day when Williams had been expected to equal Margaret Court’s all-time record of winning 24 Grand Slam singles titles ended with the 37-year-old American suffering her heaviest defeat in a major final.

Since winning the first of her slams at the 1999 US Open, Williams has lost only nine finals at the tournaments that make up the Big Four in tennis.

But never before had she been up against an opponent she described as “playing out of her mind”.

“For me any loss is not easy, per se. When someone plays lights out, there’s really not much you can do. You just have to understand that that was their day today,” said Williams, who won the last of her 23 majors while already pregnant with her daughter Olympia at the 2017 Australian Open.

“It was a little bit a deer in headlights for me. My opponent played unbelievable.”

The performance was definitely very un-Williams-like. Considering she had beaten Halep in nine of their 10 previous meetings, including at this year’s Australian Open, the American was the overwhelming favourite to win on Saturday.

Add in the fact that she had fired down 45 aces and won 83 per cent of her service games to reach the final and it seemed as if it was game on for Williams to hoist the Venus Rosewater Dish for an eighth time.

Instead, her game fell apart in a hailstorm of 26 unforced errors. In contrast, Halep’s tally stood at just three as the Romanian produced what she hailed as the “best tennis of my life”.

“Today nothing really helped. I made way too many errors for a lot of stuff to work,” said Williams, who trailed 4-0 before finally registering on the scoreboard.

The result means Williams has now had three failed attempts in finals to win that 24th major – she also contested last year’s Wimbledon and US Open showpiece matches.

There is no doubt Williams is a supreme athlete considering she has made it to three Grand Slam finals since suffering multiple complications following the birth of her daughter in September 2017, but the near misses will irritate her.

“In my 20s, I was always expected to win but… seems like every Grand Slam final I’m in recently has been an unbelievable effort to get there,” said the former world number one, who had played only five tournaments this year before her run at the All England Club.

As far as American greats Martina Navratilova and John McEnroe are concerned, Williams needs to get back to basics.

“It’s essential for Serena to play more matches. You can’t fake it. You need those matches,” said Navratilova.

McEnroe added: “Serena has to get herself even fitter because at that level she can be exposed.”

Williams had faced only one top-30 player coming into the final – Germany’s Julia Goerges in the third round – hence when she came up against former world number one Halep, she found herself ambushed with no way out.

But the champion who grew up practising on cracked public courts in Compton surrounded by drug dealers and drive-by shootings is determined to show the world that the Serena Williams story is far from over.

“I’ve got to keep trying, keep fighting and enjoying the sport,” she said.

“I just have to figure out a way to win a final.”

Until she does that, Australia’s Court can sleep peacefully knowing her record is safe – at least for now.