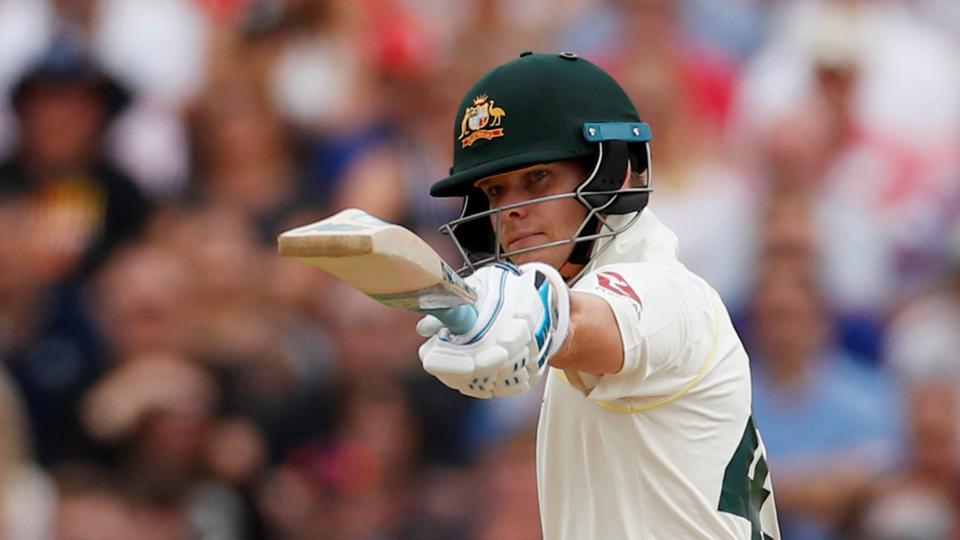 Ashes first Test, Day 4 live: Steve Smith and Travis Head started the day with a cautious start for Australia against England as they took the visitors to a lead past 100. But Head departed soon off the bowling of Ben Stokes after completing his fifty. Matthew Wade came in complemented Smith well. Steve Smith completed his 25th Test hundred in 119 innings as they toyed with the England bowlers. After Smith’s dismissal, Wade is has taken over the mantle and is increasing Australia’s lead.

Follow England vs Australia live score and updates below –

20:16 hrs IST
Tea
Australia look the dominant team after taking a lead of 266 runs against England in the first Test. Matthew Wade and Tim Paine will look to stretch Australia’s advantage after tea.

20:00 hrs IST
England dismiss Smith
After scoring 286 runs in the Test, Smith finally gets dismissed by England. He has been inspirational for Australia.

19:32 hrs IST
Australia bring up 300
Australia have scored 300 runs in the second innings with Steve Smith and Matthew Wade going strong for them against England.

19:17 hrs IST
Wade completes fifty
Matthew Wade, playing in his first match in a long time, has hit a fifty in the second innings for Australia.

18:59 hrs IST
Australia have 180-run lead
Australia are leading by 180 runs in the first Test against England. Smith and Wade are making the England bowlers toil hard for their wickets.

18: 34 hrs IST
Australia in comfortable position
Matthew Wade is making up for his first innings failure as he has supported Smith well in the second innings.

18: 15 hrs IST
Steve Smith with another century
What a comeback it has been for Steve Smith. He has hit back to back hundreds in the first Test back from suspension. He is the glue that is holding the Australian batting together.

17: 40 hrs IST
Australia have the advantage
Both Australia and England head into lunch on Day 4 at Edgbaston. Steve Smith holds the key for the visitors as he is nearing another century while Matthew Wade looks in good touch on the other hand.

17: 22 hrs IST
Australia need a partnership
Australia needs Matthew Wade to fire in the second innings. Steve Smith is heading towards another century and needs support from Wade to take Australia to a comfortable position.

17: 05 hrs IST
Travis Head departs
Ben Stokes has worked his magic as he has got an edge off the bat of Travis Head. He scored 51 runs before going back to the pavilion.

16:58 hrs IST
Heads hits a fifty
Travis Head has provided good support to Steve Smith and he completes a well-deserved 50 off 110 balls.

16:50 hrs IST
Australia lead by 100
Smith and Head have taken Australia’s lead past 100 runs in the first Ashes Test at Edgbaston. Smith is heading towards another hundred while Head is about to complete his fifty.

15:50 hrs IST
Smith completes 50
Steve Smith has continued his impressive form in Test cricket as he completes his 50 in the second innings for Australia. This is the first Test match that Smith is playing in more than a year.

15: 30 hrs IST
Moeen Ali looking dangerous
Moeen Ali is troubling Steve Smith at the start of the day and Australia would be vary of his threat.

14:44 hrs IST
Anderson a worry for England
England fear the worst as James Anderson could be out of the remainder of the first Ashes Test with an injury. England would now pin their hopes on Chris Woakes and Stuart Broad to end Australia’s resolve.

India vs West Indies Live Score, 2nd T20l: Good start for Rohit Sharma, Shikhar Dhawan
Navdeep Saini on debut: ‘I could not believe it when I got India cap’