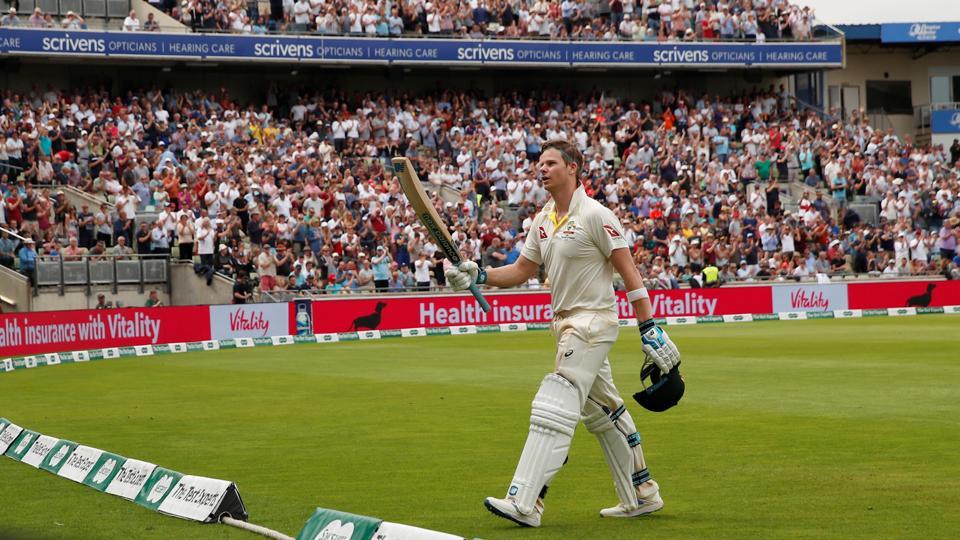 Steve Smith hit his second century of his comeback Test on Sunday as Australia set England a daunting 398 to win the Ashes opener at Edgbaston. Ashes-holders Australia, bidding to win their first Test series away to England in 18 years, made 487-7 declared in their second innings as they capitalised on the absence from the home side’s attack of the injured James Anderson.

That left England needing 398 for victory — the most they have made in the fourth innings to win a Test was 332-7 against Australia at Melbourne back in 1928/29. Australia captain Tim Paine’s declaration late on the fourth day left England with an awkward seven overs to bat before stumps.

Rory Burns, fresh from his maiden Test century in the first innings, and Surrey teammate Jason Roy saw England to 13-0 at the close. Smith made 142 following his 144 in the first innings of the match — the former Australia captain’s first Test since the end of a 12-month ban for his role in last year’s ball-tampering scandal in South Africa.

He is just the fifth Australian to score hundreds in both innings of an Ashes Test. Matthew Wade marked his first Test for nearly two years with a fine 110.

Smith, having reached lunch on 98 not out, went to three figures in style when he cover-drove England paceman Stuart Broad for his 10th four in 147 balls faced.

He celebrated by removing his batting helmet and waving his bat joyously towards the Australia changing room. And while there was applause from a packed crowd, there were also renewed chants of “Crying on the telly, we saw you crying on the telly” in a reference to the emotional press conference Smith gave in Sydney after he was sent home from South Africa.

“When he goes out to bat, it’s almost like he’s in a trance-like state,” former Australia captain Waugh told Channel Nine. “He knows exactly what he’s trying to do, exactly what the opposition are trying to do… he analyses every ball and it’s like a computer, he spits out the answer,” added Waugh, now a mentor to the Australia squad.

Smith has now scored 1,116 runs in his past 10 Ashes innings, a figure second only to the 1,236 made over the same span by Australia’s Don Bradman — widely regarded as Test cricket’s greatest batsman. England captain Joe Root brought himself on to bowl his part-time off-breaks and deployed Joe Denly’s occasional leg-spin as frontline spinner Moeen Ali struggled to exert any control.

Wicketkeeper Wade, playing as a specialist batsman, with Paine behind the stumps, reverse-swept Root to complete a 70-ball fifty. The new ball, however, did eventually give England the wicket they craved.

Chris Woakes got a delivery to deviate in the air outside off stump, with Smith edging an intended drive to wicketkeeper Jonny Bairstow.

As Smith walked back after a 207-ball innings including 14 fours, the cheers at last drowned out the jeers.

Wade, who overturned an lbw decision on 69, reverse-swept Root for the 15th four of his innings to complete a 131-ball hundred, his third in Tests.

He holed out off Ben Stokes soon afterwards but it scarcely made any difference, with James Pattinson belting Broad for one of four sixes in his rapid 47 not out as England became increasingly ragged in the field.