Rajput dreams through the nightmares 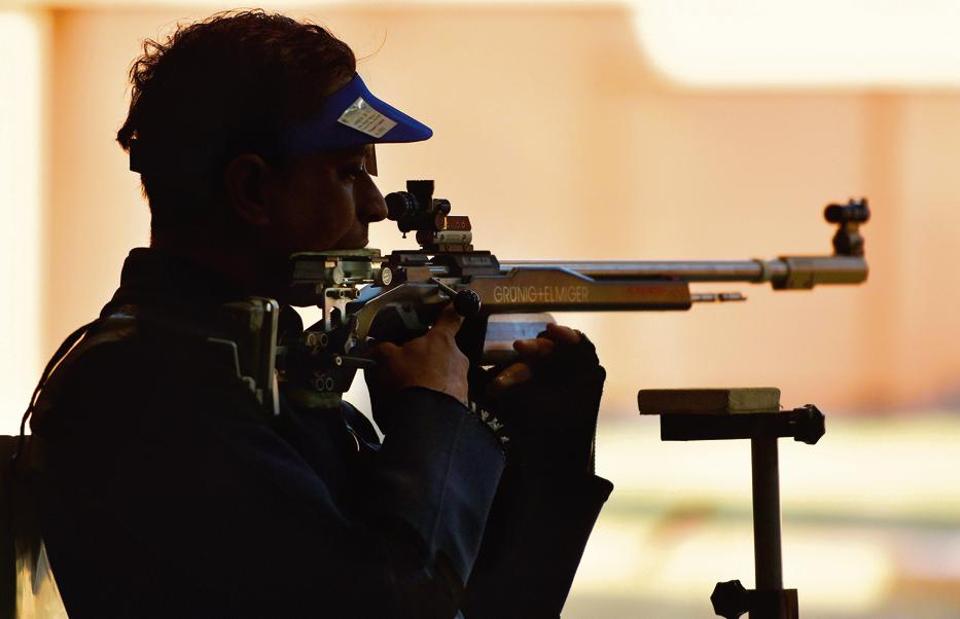 Station No. 34. In the cavernous and dimly lit 50m shooting arena inside the Karni Singh Range, Sanjeev Rajput stands at the ‘last inhabited’ firing point, unmindful — or, perhaps, numb — to the babble of voices and the deafening staccato of bullets exiting pistols and rifles.

For company, Rajput has his equipment. A faded black-and-white shooting jacket and trousers, a large, well-worn trolley bag, and his best companion, the 50m rifle — dark, menacing and still hungry after shooting down four consecutive Asian Games medals since 2006, three Commonwealth Games medals, including gold at 2018 Gold Coast, and three World Cup medals.

Rajput is in no hurry even after three hours of practice. He dismantles his rifle with slow deliberation, first removing the delicate rear-sight apparatus and then the barrel. He cleans the barrel with a ‘pull through’ and says in his soft lisp, “this is a brand new barrel. I just imported it.”

With only two more Olympic qualifying events to go —the World Cup in Rio and the Asian Championships in Doha —he is getting in as many hours as he can trying to familiarize himself with the barrel.

The pressure has slowly been building on Rajput — not from anyone else but from within —as the former navy man tries to shore up a career that has been ravaged by a wave of disappointments and a life-changing episode in the last three years.

Rajput has won four straight Asiad medals. ( Getty )
At the last Olympics in 2016, he had earned a quota, but was kept out of the squad in favour of the legendary trap shooter Manavjit Singh Sandhu.

Then, later that year, Rajput was accused of rape by a fellow shooter who alleged that he was in a relationship with her. At that time, he had been working as a coach with Sports Authority of India for more than a year; he lost his job. Rajput denied the allegations and made bail. Then he withdrew into the sport.

“My shooting remained consistent throughout,” he says.

Despite the turmoil he was embroiled in, he touched a personal best in his career in 2018, winning an individual silver against the top shooters in the world in a nerve-wracking final at the 2018 Asian Games in Jakarta.

Rajput is 37 and most of his contemporaries have either retired or fading out of elite competition. Only he continues to drive himself to improve, alongside a field made up largely of teenagers, hoping for one last shot at the one medal that has eluded him.

All his efforts are now channelised towards securing an Olympic quota; if he gets it, it will be his fourth consecutive quota place.

“A lot of youngsters are winning medals, breaking records and securing Olympic quotas. Change is the only constant and, though I have not thought about retirement yet, I have to do it (win an Olympic quota) for myself,” says Rajput.

Rajput has seen struggle all his life. His father was a street food vendor in the Haryana small town of Yamunanagar, and money was always hard to come by. Rajput had grabbed the first job that came his way, joining as a seaman with the Indian Navy.

“I belong to a very poor family, so the sooner I got a job, the better; that was foremost on my mind,” he says. “I had only done 10+2 and was going to take admission in graduation and pursue a B.Sc, but a fixed source of income was more important for me.”

In 1999, after joining the Navy and completing his basic course, he was sent to sea for professional training, and commissioned to the gunnery.

“At that time, I didn’t have any special affinity for shooting,” he says. “But it was part of our routine to shoot 7.62mm fullbore ammunition, and at the age of 18, it was something.”

A teenaged Rajput would have been warned by his instructors about the power of these potent weapons.

The recoil from a 7.62 ammo leaves bruises on the shoulder of the shooter.

“It’s like a Mike Tyson sucker punch on the shoulder”, a top Indian shotgun shooter says of the experience.

“There are no shooting ranges on ships, so we fixed a target on the quarterdeck with long sticks and hooks and took aim,” Rajput recalls. “The ship lurched, the target swayed and standing on the unstable deck with those heavy assault rifles, we took aim. That experience aroused my interest in shooting. I liked that feeling.”

Rajput shot with all kinds of weapons—pistols, carbines, and big bore rifles—and began competing in inter-ship competitions. By 2002, he was part of the Navy’s sport shooting team.

“The same year, I became a member of the national squad,” Rajput says.

He had found his calling, and he stuck with it, specializing in 50m 3 Positions (3P), and bringing home his first major international medals from the 2006 Commonwealth Games, before making it to the Olympic team.

“At both the 2008 and 2012 Olympics, I narrowly missed the finals in 3P. The third time I qualified, for Rio, I was dropped,” he says. “But if you look at (Abhinav) Bindra and Gagan Narang, they both won medals in their third outing at the Olympics. The first time a person goes, it’s (Olympics) a new world for him. The second time, still some preparations are left but the third time a shooter is thoroughly prepared. I was not given that third opportunity. Getting dropped for Rio, I thought I should quit the sport.”

Rajput took the decision to quit the Navy in 2014, a decision that led to unforeseen trouble. He had already received an appointment letter for the post of Dy Superintendent of Police in Haryana, when the government changed at the state and the most recent appointments made by the previous government were stayed.

The Sports Authority of India offered him the job of a coach and he says he is “grateful for that” because it rekindled his fire for the sport.

“The best thing that happened when I coached was that as I taught my technique, I could rewind and further improve my technique,” he says. “It was a blessing in disguise as my basics became very strong. In 2016, I won the World Cup silver in Baku and followed it up by qualifying for two World Cup finals in 2017. Then came the Gold Coast Commonwealth Games gold with a record score in 3P.”

But when the rape allegation was made, he lost his job as a coach as well.

“Disappointments have come at crucial phases of my life. Either I can say, why does this happen to me? Or I can say, ‘OK, let’s make the most of whatever is left,” Rajput says. “That’s why I’m focusing on the new barrel; get it ready on time to begin a new chapter in my life.

“Yes, I am jobless. I doubt anyone will give me a job now. But no one can stop me from opening a private range in some corner of this country after I retire. They also can’t stop me from securing an Olympic quota and possibly an Olympic medal in Tokyo.”