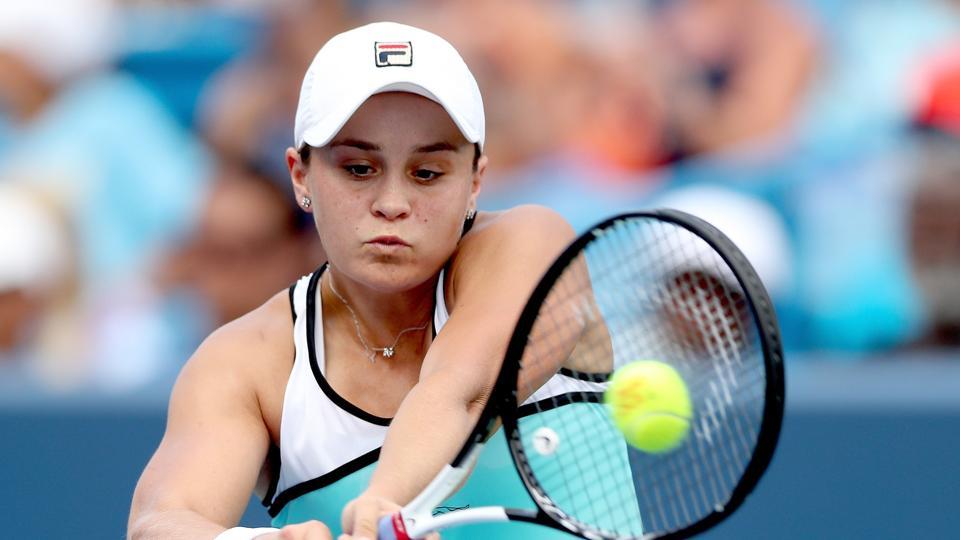 Top seeded Ash Barty overcame a slow start to defeat Maria Sharapova 6-4 6-1, while Simona Halep battled past Ekaterina Alexandrova 3-6 7-5 6-4 in the second round of the Cincinnati Masters on Wednesday.

French Open champion Barty double faulted to give Sharapova a 2-1 lead in the first set and it looked like an upset could be brewing in the showdown between the two former world number ones.

But an error-prone Sharapova bowed out after she produced six double faults and squandered six of her seven break point opportunities.

“Overall it was a pretty clean performance,” Barty said.

“It’s difficult to come out against a player like Maria. She’s an incredible champion, she knows how to fight and she makes you earn every single point.

“So I was really pleased with the way I was able to hang in there today and win some of those big points.”

Barty earned an early break in the second set when she rifled a crosscourt forehand that caught Sharapova flat footed for a 2-0 lead.

Sharapova fought hard the next game, forcing seven deuces but was unable to break and Barty cruised to the finish from there, winning 11 of the last 13 games.

Wimbledon champion Halep had her back against the wall against the big-serving Alexandrova when she dropped the first set and trailed 5-4 in the second but won the next three games and elevated her play again in the decider.

The match was the first for Halep since she pulled out of her quarter-final at the Rogers Cup on Friday with an Achilles issue but she moved well in her battle with the Russian.

Fourth seed Halep is searching for her first title at the event after three runner-up finishes in 2015, 2017 and 2018.

“I feel confident every time I come here but the conditions are very tough. The court is very fast,” the Romanian said.

World number one Naomi Osaka improved to 4-0 lifetime against Aliaksandra Sasnovich with a 7-6(3) 2-6 6-2 win.

Osaka, who regained the top ranking after Barty’s early exit from the Rogers Cup last week, smacked 24 winners as she looks to sharpen her game before heading to New York later this month to defend her U.S. Open title.

She faces Hsieh Su-Wei in the third round.

Svitolina set up a date with American Sofia Kenin, who beat Zarina Diyas 6-4 6-1.

Another American, eighth seed Sloane Stephens, had a tougher match against Yulia Putintseva but prevailed 2-6 6-4 6-3 and will next face Russian Svetlana Kuznetsova, a 4-6 7-6(7) 6-2 winner over Ukraine’s Dayana Yastremska.