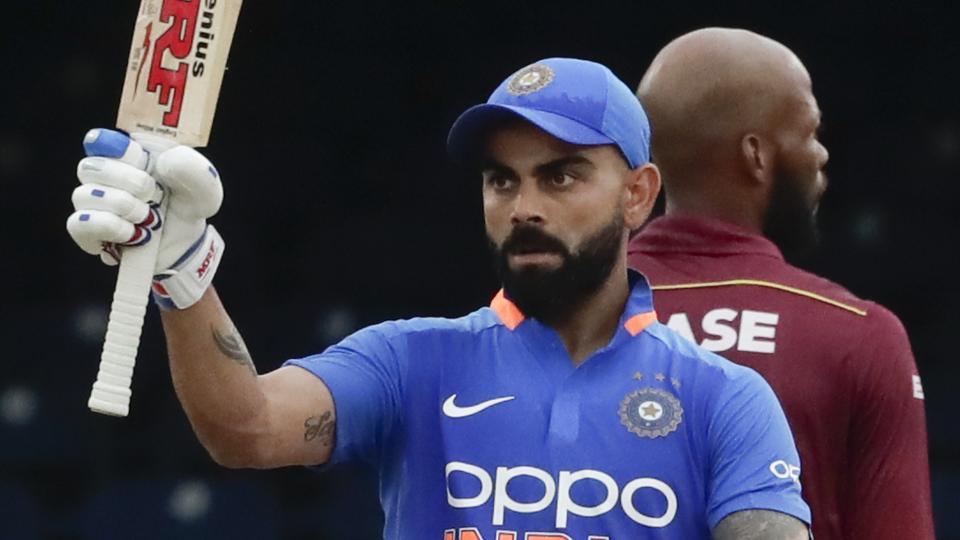 Classy Virat Kohli upstaged rampant Chris Gayle as India defeated the West Indies by six wickets in the rain-affected third and final One-Day International of their series at the Queen’s Park Oval in Trinidad on Wednesday. Set a revised target of 255 based on the DLS scoring method after Gayle blazed 72 in pacing the home side to 240 for seven off 35 overs, Kohli was at his most imperious in compiling an unbeaten 114 — his second consecutive ODI hundred — to pilot his team to 256 for four with 15 balls to spare. Let’s take a look at how the Indian players fared in this contest.

Also Read: Will Kohli be fit for 1st Test? The Indian captain provides an update on injury

Opener Rohit Sharma had a poor outing yet again as he could muster just 10 run in the chase. Although he looked good early on and blasted couple of boundaries as well but he couldn’t continue the start and was run-out unceremoniously in the third over.

Opener Shikhar Dhawan couldn’t end the tour on a high as he was dismissed for just 36 runs in this clash. After failing in the T20I series, Dhawan couldn’t come up with the goods in the ODI series as well. The southpaw hit five boundaries during the course of his innings and will be disappointed that he couldn’t convert the start into a big one.

This man never ceases to amaze. His consistency in white-ball cricket is unbelievable and he is going all guns blazing towards Sachin Tendulkar’s century record. Kohli slammed his 43rd ODI ton power India to a series-clinching win and he also added numerous records into his kitty. He thumped 114 runs off 99 deliveries and his innings included 14 boundaries. Kohli is easily best ODI batsman in the world at the moment and that too by some distance.

Wicket-keeper-batsman Rishabh Pant remains an enigma for Team India. One day be puts up a match-winning performance and the other day, he fails to even turn up. This match was the latter for the Delhi Dasher as he was dismissed for a first ball duck in the chase. His only contribution in the match was taking a catch to dismiss Carlos Brathwaite.

One player whose stocks have risen after the conclusion of the ODI series is middle-order batsman Shreyas Iyer. The right-hander finally came of age on and this could the beginning of something new for him. Iyer slammed his second fifty of the series and struck another century stand with skipper Kohli to bail India out of trouble. Iyer scored 65 runs off 41 deliveries and his stunning innings included three boundaries and five massive sixes.

Also Read: ‘I was exactly the same when I came in,’ Kohli heaps praise on Iyer

All-rounder Kedar Jadhav put up a steady performance with both bat and ball. He bowled four overs and conceded just 13 runs without picking any wicket. During the chase, he scored an unbeaten 19 off 12 deliveries to take India home after the dismissal of Shreyas Iyer.

All-rounder Ravindra Jadeja had a good outing with the ball but he wasn’t required to bat as other batsmen did the job for the team. Jadeja bowled five overs and returned with good figures of 1/26. He picked up the crucial wicket of Shai Hope to dent the Windies innings.

After starring in India’s win in the second ODI, fast-bowler Bhuvneshwar Kumar ended the ODI series on a bad note. He returned wicketless and gave away runs a plenty. In five overs, Bhuvneshwar conceded 48 runs at an economy rate of 9.6.

Fast-bowler Mohammed Shami had a good outing and he was among the wickets as well. He scalped the crucial wickets of Shimron Hetmyer and Nicholas Pooran, both of whom were set in the middle and could have hurt India in the latter stages of the innings. One negative point for being expensive as Shami gave away 50 runs in seven overs.

Left-arm pacer Khaleel Ahmed has a knack of picking wickets and this match was no different as he ended up with three in his bag. Khaleel accounted for the wickets big ticket players like Chris Gayle, Jason Holder and Carlos Brathwaite as India were successful in keeping the Windies score to a gettable one. However, Khaleel once again proved to be very expensive as he conceded 68 runs in 7 overs.

Leg-spinner Yuzvendra Chahal returned into the side in place of Kuldeep Yadav and put on a solid performance. Not only he picked up a wicket but also proved to be economical. In seven overs, he gave away just 32 runs and accounted for the wicket of Evin Lewis, who had blasted 43 runs off 29 deliveries.