After Goldberg and Shawn Michaels, WWE Hall of Famer Edge to also come out of retirement? 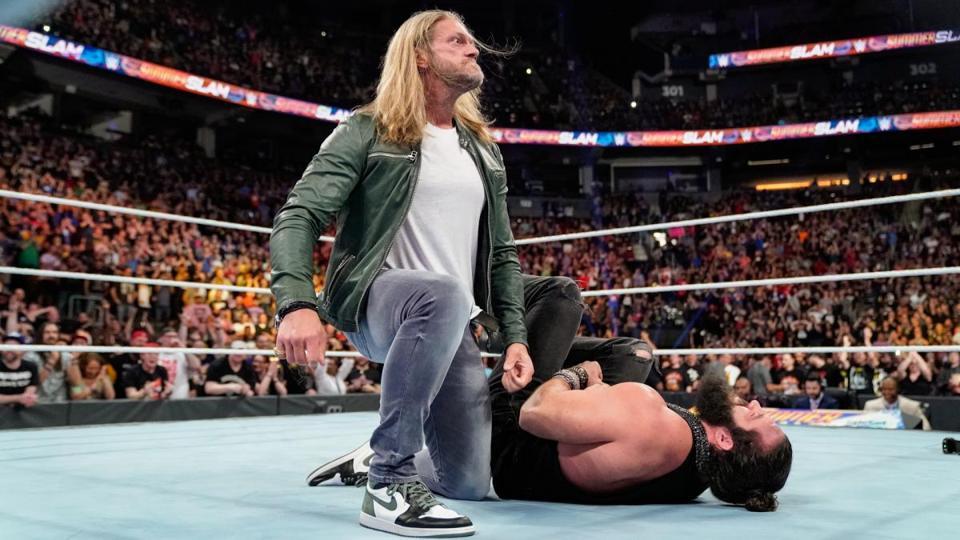 WWE SummerSlam saw the return of two Hall of Famers. Although Goldberg was already announced for a match with Dolph Ziggler, the return of Egde was a big surprise for the WWE Universe. But that surprise turned into astonishment when Edge landed a spear on Elias in his hometown of Toronto, Canada. It is to be noted that Edge retired from professional wrestling in 2011 due to a neck injury (cervical spinal stenosis) and was told by the doctors that he could be paralysed if he continued wrestling.

However, the spear landed on Elias led to speculations that even Edge could come out of his retirement. The rumours had been going on for almost a decade that one bump could be detrimental to Edge’s life. However, Edge has now come out and clarified some misconceptions about his injury.

He has even stated that he ‘could have a match tomorrow if the WWE wants.’

‘Literally, five minutes before I saw you I was asked, ‘what do you think, do you want to do a promo?’ so, it was probably 15 minutes before you saw me go out there. It was all last minute. Poor Elias had to go and write a song in like 15 minutes, so that tells you how much of a pro he is,’ Edge said on his E & C’s Pod of Awesomeness.

‘What people don’t know is I do all my fight scenes, so I’ve actually done a couple of Spears acting. with that, there’s contact and I’m hitting stunt guys like I normally would. For Haven, I did one to Kurgan, and we were landing on concrete.’

‘I think in terms of my neck there’s a lot of miseducation. When I first found out with my retirement speech, I said what I knew at that point. I’ve since learned a lot more. I’m a highly physical person. I fell off a mountain bike a few weeks ago. They don’t give me a stunt double. I know where I’m at and I’ve seen my neck guys down here and they’ve told me the do’s and don’ts and I’m not in the midst of being told I have to retire, you know?’

‘So, I’m much more emotionally aware and hearing everything and going ‘okay, what my limitations are going forward?’ And hitting the Spear is not one of them. To be perfectly honest, I think I could do a match tomorrow,”’Edge continued.

‘I might be blown up but I’d be okay. It’s just from what I know with the WWE medical staff, they won’t allow. It is what it is, right? Just from the stuff I’ve experienced in the last eight years and the things I’ve done physically, it’s like ‘I could pull off one.’ I’m not saying I go back and do a year’s worth.’

Edge has literally confirmed that he would like to have a match in the WWE in the future. It just depends if WWE is willing to take the risk on him. So it is definitely possible that the 11-time champion could have ‘one more match’ in the squared circle.