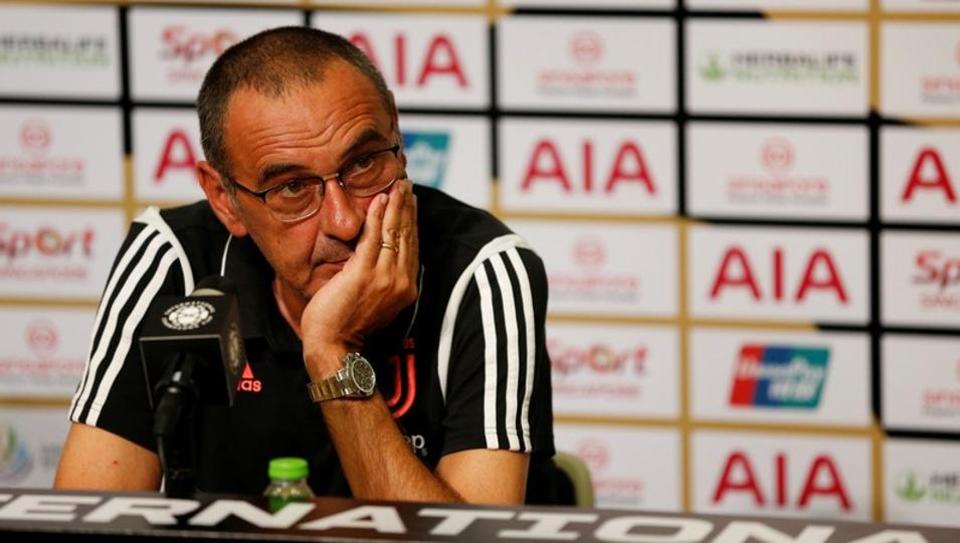 Juventus begin their Serie A campaign this weekend under new coach Maurizio Sarri as the multiple Italian champions gamble on the veteran delivering another style of Serie A title. The Turin giants start their quest for a ninth consecutive title in Parma on Saturday but could be without Sarri on the bench after the 60-year-old was diagnosed with pneumonia on Monday.

Sarri returns to Italy after one turbulent season in the Premier League with Chelsea, having previously coached his hometown team Napoli for three seasons.

Chain-smoking Sarri’s appointment, in place of the clean cut Massimiliano Allegri who had delivered the last five of their Serie A titles, is a break in tradition for Juventus.

But after also ditching their iconic black and white striped jersey last season, the club are looking for a change in direction.

Despite their success Juventus have often been criticised for their boring defensive style of play.

Club bosses want a more attractive eye-catching style of football in an attempt to increase their fan base outside of Italy.

While Sarri’s only major title was the Europa League last season with Chelsea, he promises to give serial Italian champions Juventus a more dynamic style of play.

Goalkeeper Gianluigi Buffon, returning to Turin after a season at Paris Saint-Germain, thinks the change of direction can pay off.

“Those who follow the same path will always achieve the same results, so Juve are seeking the Champions League and wanted to try breaking away towards pastures new,” said the 41-year-old.

“Sarri is not a revolution, nor a gamble. He simply represents an untested path, a whole other story.”

But Juventus have spent big giving Sarri a stellar squad to target a 36th Scudetto and their first Champions League title since 1996.

Cristiano Ronaldo, a player who Sarri insists “will make the difference”, will again be central to attack with newly-signed Dutch star Matthijs De Ligt the jewel in defense alongside veterans Giorgio Chiellini and Leonardo Bonucci.

The midfield has been strengthened with PSG’s Adrien Rabiot and former Arsenal star Aaron Ramsey, both acquired on free transfers but on large salaries.

For Juventus sporting director Fabio Paratici all the pieces are in place for Sarri to deliver another style of football.

“We’re very happy with what has been done. We bought de Ligt, who all the top teams wanted,” said Paratici.

“We managed to buy him, along with two big players on free transfers: Rabiot and Ramsey, who were courted by many.

“Juve has very high-level players in all departments, a squad of absolute value.”

Juventus will be hoping these players and their new coach can implement the ‘Sarriball’ football philosophy: a fast-paced attacking style, that impressed during his time with Napoli.

“We can’t wait to start the season. We’ve already assimilated Sarri’s mentality and, we know what to do.

“We all still have to improve naturally, but we are on the right path.” De Ligt also praised Sarri.

“He was one of the reasons that I wanted to join here, I’ve heard a lot of good things about him and I like his footballing philosophy and how he prepares his defence.” Sarri described coaching Juventus as “the crowning” moment of his 30-year managerial career.

“I arrive surrounded by sceptics, but then I always am. I had the same at Empoli, Napoli and Chelsea.

“In football, I know only one way of removing scepticism from the minds of people: by winning convincingly.

“I haven’t won a lot, but I believe that having fun on the pitch doesn’t stop you winning.”

Alvaro Morata helps Atletico Madrid get off to winning start in La Liga
‘It’s up to them’: Ole Gunnar Solskjaer refuses to blame Paul Pogba after penalty miss