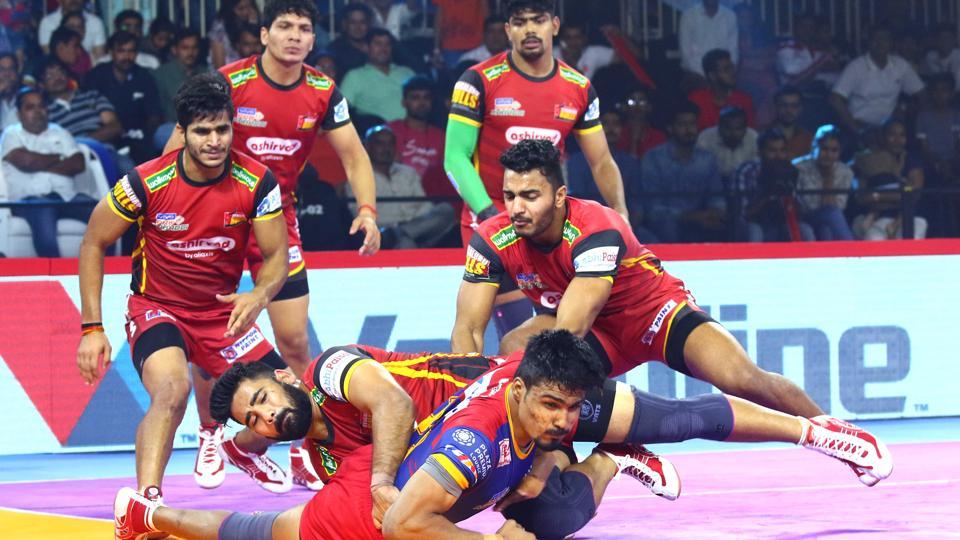 UP Yoddha picked up an important 31-24 victory against league leaders Jaipur Pink Panthers in the second match of Pro Kabaddi League at a packed Jawaharlal Nehru Indoor Stadium on Monday. Yoddha’s win, on match number 50 of Season 7, halted Panthers’ winning run and showed that the league is far from over for even the bottom-placed teams. Shrikant Jadhav (7 points) and surprise-inclusion in the team, Surender Gill (8 points), were the stars for Yoddha as they climbed to 8th in the league standings.

The match started with a surprisingly poor defence by both sides, with no successful tackles till the 11th minute, despite having the league’s best tacklers in Sandeep Dhull and Sumit on the mat.

But the game changed after the first tackle, with both teams, especially the Panthers producing impressive Super Tackles to stay neck-to-neck. Shrikant Jadhav’s improved form reduced the Jaipur men and the U.P. team secured their first All-Out with two minutes remaining – a two-point raid by Surender Gill taking out both Amit Hooda and Sandeep Dhull.

Yoddha ended the half with a six-point lead (17-11). The key to Jaipur Pink Panthers’ successful start to the season had been the time spent by Deepak Niwas Hooda on the mat. U.P. Yoddha had identified this as an important area to target in the first half, with the captain spending a lot of time in the dugout.

The second half started brightly for the all-rounder though, picking up a three-point Super Raid to start the proceedings. But he picked up an injury in the process, something U.P. Yoddha, heavily marshalled by captain Rishank Devadiga, went on to capitalise.

Devadiga, Shrikant Yadav and Surender Gill combined as a raiding unit for the team as they opened a 9-point lead with nine minutes remaining. Deepak Hooda battled what looked like a troubled knee to keep his Jaipur side in the contest but the Yoddha defence held firm to register their third victory of the season.