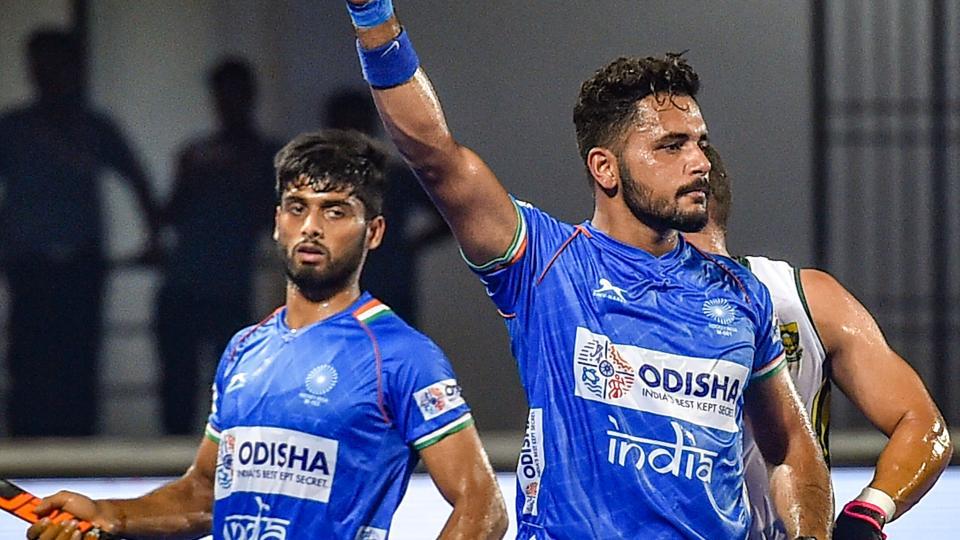 Harmanpreet Singh’s full concentration was on manoeuvring his baggage trolley through the narrow pathway created for security purpose. He was one of the last to come out of Indira Gandhi International Airport’s gate no. 6. in New Delhi. Unlike in the hockey field – where Harmanpreet’s stick breathes fire and face exerts aggression, forcing everyone to take notice of him – he prefers the backseat. By this time, most of his teammates and support staff were busy satisfying the photographers and journalists, who were eagerly waiting for the arrival of Indian hockey team – the winners of the Olympic Test event in Japan. But Harmanpreet was in his own zone.

Hard to imagine, it was the same Harmanpreet, who despite being 23, led a young Indian side rather aggressively to a 5-0 victory over New Zealand in the Olympic Test Events final barely a couple of days ago. It’s perhaps harder to imagine that it was in the same tournament four years ago that a 19-year-old Harmnapreet donned the India colours for the first time.

Life has been on a fast-track mode for the Amritsar born drag-flicker ever since he made waves for the junior side in 2014. He was soon drafted into the senior Indian side for the Test Events in Odissa in 2015 and before anyone could realize, he became one of the youngest Indian hockey players to represent the country at Rio Olympics in 2016. Three years down the line, he was appointed stand-in captain for his first major tournament in Japan. Things were bound to take their toll, explaining why Harmanpreet looked a bit fatigued on his return to the country. But that doesn’t mean, he wants anything to change, he wants everything to go at the same pace. And in fact, has already set his targets for the Olympic qualifiers.

“Eagerly waiting for the Olympics… Have been working hard for a long time for the Olympic qualifiers, had a preparatory camp before going to Japan, that helped a lot. There are a few areas that we need to work on, we’ve got time, we are going to have another camp before the qualifiers, so hopefully we’ll figure it out,” said Harmanpreet in an exclusive chat with Hindustan Times.

The 23-year-old had every right to feel confident about India’s chances at the multi-national event in Japan next year. His side had played near-perfect hockey – barring a round robin clash against New Zealand, which was the only match they lost – at the four-nation tournament in Tokyo.

“We made a few mistakes in the group match against New Zealand and wasted a lot of chances so we had a meeting before the finals to chalk out a plan and thankfully it worked out well. We converted our chances and won,” Harmanpreet added.

Regular captain Manpreet Singh, goal-keeper Sreejesh, Birender Lakhra and a number of other senior players were given a break from the Test events, which gave Harmanpreet the opportunity to don the captain’s arm-band and he thoroughly enjoyed the experience.

“It feels great… Yes it was first my event as captain and it was a challenge leading a young side but thankfully everyone knew their roles, backed each other which made my job easy,” Harmanpreet said.

Ironically, Harmanpreet was part of the same junior side which was led by current India captain Manpreet Singh. “Oh yes I remember! But I honestly don’t think about captaincy, that is something which is not in my hands and I would like to delve too much too much into,” said Harmanpreet when asked about his aspirations to topple Manpreet as the leader.

Harmanpreet was all praise for India’s Australian head coach Graham Reid. “He supports the entire team and especially the youngsters. Whenever an individual is having an issue with something, he goes up to the player and tries to solve it. He gives equal importance to each member of the squad and I think that is what makes a good team,” he signed off.