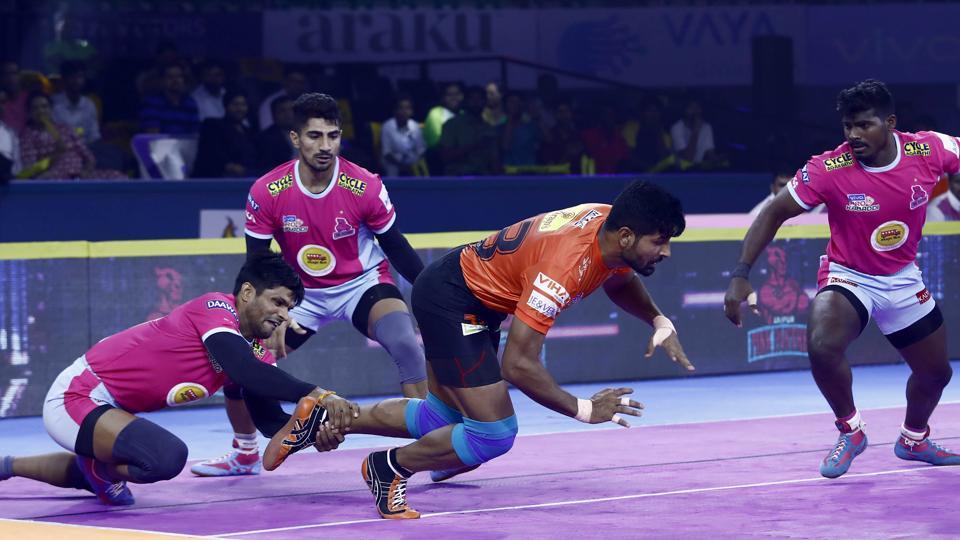 Rohit finished the match with 13 raid points as Bengaluru inflicted a heavy, demoralising loss on the season one champions.

The match had been billed as a battle between attack vs defence as the league’s second-best raiding unit Bengaluru Bulls (averaging 19 raid points per match) took on the best defending unit Jaipur Pink Panthers (11.5 tackle points per match).

And it was the raider-heavy side that started the half positively, with captain Rohit impressing in his raids. Jaipur had been struggling in the raids in the recent past, and the trend continued as captain Deepak Niwas Hooda struggled to lead his unit’s attack.

The Bulls’ defence, manned by Mahender Singh and Saurabh Nandal, were in no mood to let Jaipur’s raider settle into the match, strangling Pink Panthers’ ability to score points.

A Rohit raid in the 12th minute led to the first All-Out of the match as the Bulls cruised to a 9 point lead.

The first half ended with the scores 22-8 with Bulls dominating in every aspect of the game.

The Bulls were blamed for taking their foot off the pedals in their narrow loss against Dabang Delhi in their previous encounter and it was not surprising to see the team continue their aggression on the mat.

The Bengaluru team inflicted the second All-Out on the Pink Panther three minutes into the second half as the Bulls took the lead.

For once, Pawan Sehrawat was playing a secondary role in the attack for Bengaluru as Rohit took on the lead like a man with a point to prove.

Rohit’s Super Raid in the eighth minute of the second half which took out Jaipur’s big defenders Sandeep Dhull, Nitin Rawal and Santhapanaselvam and gave him a Super 10 (10 raid points) was a glowing testimony to his raiding prowess and Bengaluru’s form.

Sushil Gulia’s two-point raid with 7 minutes in the clock helped Pink Panthers inflict an All-Out on the Bulls to reduce the lead to 12 points.

But the surge came late for the Pink Panthers as Bengaluru Bulls continued their aggression to wrap the match up.