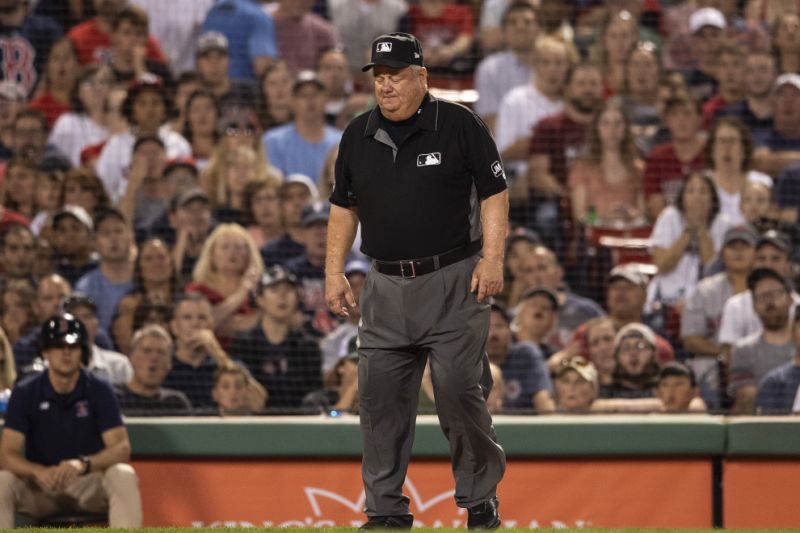 Longtime umpire Joe West was behind the plate on Sunday night for the Philadelphia Phillies’ 5-2 win against the New York Mets at Citizens Bank Park, the final game of their three-game series.

Things, however, got a bit awkward in the top of the eighth inning after outfielder Rajai Davis attempted to slide into home.

After second baseman Jeff McNeil hit a grounder to first base, Davis attempted to score and tried to slide around Phillies catcher J.T. Realmuto. Davis, though, was too late and ended up sliding wide right.

After Realmuto made the tag, Davis’ momentum ended up carrying him right into West’s legs — which knocked the 66-year-old over.

and in a moment of perfect symbiosis: Rajai Davis’s face inflicts the perfect insult-to-Joe-West’s-injury pic.twitter.com/RXrqYCTghb
— Hannah Keyser (@HannahRKeyser) September 2, 2019
West awkwardly landed right on top of Davis, and struggled to get back up to his feet — even after trying to use Davis’ back to do so.

Eventually, Phillies pitcher Hector Neris had to help him back to his feet.

Then, finally, West was able to officially make the call at the plate.

Davis’ face during the whole thing, however, was priceless.

It didn’t take long for fans to take to social media after the incident at home plate, either.

Gareth Bale scores twice and sent off as Real Madrid held by Villarreal
DRAW GAME of the week:Manchester United 1, Liverpool 1 At Old Trafford