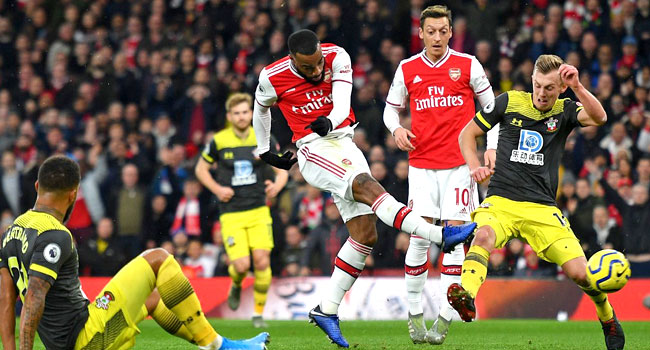 Arsenal manager Unai Emery and his players were booed off despite Alexandre Lacazette’s 96th-minute equaliser denying Southampton a first win at the Gunners since 1987 in a pulsating 2-2 draw at the Emirates on Saturday.

Emery’s chances of remaining in charge fade with every passing week as a point at home to a side languishing in the relegation zone does little to further his side’s chances of achieving a top-four finish.

The Spaniard has received a vote of confidence from the board of a club that does not often fire managers, but many fans had already lost faith in him before this setback.

Lacazette’s goal, his second of the match, at least avoided an embarrassing defeat, but Arsenal have won just two of their last 11 Premier League games and slip down to seventh in the table behind Wolves and Burnley.

Despite their lowly status, Southampton were the better side and peppered the Arsenal goal with 21 shots to the home side’s 12.

Stuart Armstrong flashed an early Southampton opportunity narrowly wide but Arsenal didn’t heed the warning and were caught out by a ninth-minute free-kick.

Nathan Redmond, the man fouled, was still on the ground when Ryan Bertrand played it quickly to Danny Ings, who strode into space on the left before unleashing a low drive that went past goalkeeper Bernd Leno and in off a post.

That prompted boos from some home fans but the mood was in no way lightened by Southampton’s James Ward-Prowse firing the game’s next chance straight at Leno.

Lacazette changed the narrative with an equaliser in the 18th minute. Mesut Ozil’s cross from the left found Pierre-Emerick Aubameyang in space in the box and although Bertrand blocked his shot the rebound fell to the France striker to fire home on the turn.

The second half was frantic from the start as Leno had to make a save from team-mate Lucas Torreira, who poked the ball towards his own goal in the act of dispossessing the lively Michael Obafemi.

Southampton then survived a VAR check for a penalty when Armstrong stuck up a hand to stop the ball smashing him in the face.

Arsenal’s club-record signing Nicolas Pepe started on the bench for the third straight game, but looked lively after being introduced at half-time and hit the bar with an acrobatic back-post effort that reared up off the turf.

But it was the visitors who continued to pose the greater threat and they were awarded a penalty when Kieran Tierney pushed Ings over to stop him reaching a dangerous Obafemi cross. Ward-Prowse’s first effort was saved by Leno, but he made it 2-1 on the rebound.

Joe Willock then prevented Saints replacement Moussa Djenepo from wrapping up victory with a block of a goalbound shot, with Djenepo firing wide from just seven yards out during seven minutes of added time.

Those misses proved to be costly as Arsenal substitute Gabriel Martinelli found Lacazette unmarked at the back post for a smart finish and an undeserved equaliser with virtually the last kick of the game.