Higuain, Dybala Score As Juventus Stay Top Of Serie A 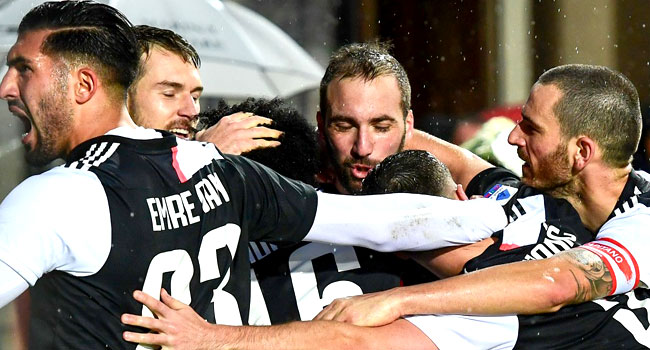 Gonzalo Higuain grabbed a second-half brace with Paulo Dybala adding a late third as Juventus rescued a 3-1 comeback win over Atalanta in the final quarter of an hour to stay top of Serie A on Saturday.

Robin Gosens had nodded Atalanta ahead after 56 minutes as the Bergamo side chased their first Serie A win over Juventus since February 2001.

Higuain hit back with two goals in an eight-minute spell while Dybala marked his 200th Serie A appearance with the final goal two minutes into injury time.

Maurizio Sarri’s side open up a four-point lead on second-placed Inter Milan, who travel to Torino later on Saturday, as Atalanta drop to sixth place after their fourth league game without a win.

Cristiano Ronaldo missed the trip to Bergamo despite his four-goal spree for Portugal because of a slight knee problem ahead of Juventus’s Champions League game against Atletico Madrid on Tuesday.

Higuain had pulled Juventus level after 74 minutes with a ball that took a deflection off Rafael Toloi to beat Pierluigi Gollini in the Atalanta goal.

The Argentine completed his double when he picked up a cross from Juan Cuadrado on 82 where the Colombian put his hand on the ball during a sliding tackle at the start of the action.

Then Dybala broke through the Atalanta defence to finish off for his fourth Serie A goal this season.

Atalanta had their chances with Musa Barrow missing an early penalty.

The 21-year-old Gambian rattled the crossbar after 17 minutes following a penalty awarded for a Sami Khedira handball.

Inter will be looking to make it a perfect seven league games on the road this season as they travel to Torino.

Serie A runners-up Napoli, in seventh, desperately need a result at 14th-placed AC Milan, who are themselves floundering.

Footballer Suspended By His Club After Being Caught Having S*x In A Nightclub Toilet
Emery, Arsenal Players Booed Despite Late Draw Against Southampton