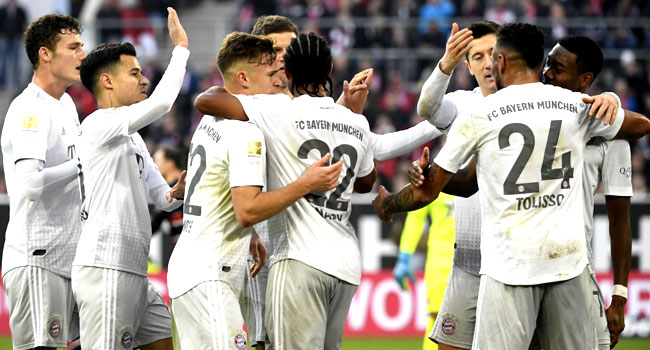 Managerless Bayern Munich went second in the Bundesliga on Saturday with a 4-0 romp at Fortuna Duesseldorf as leaders Borussia Moenchengladbach suffered a shock 2-0 defeat at Union Berlin.

Bayern’s interim coach Hansi Flick enjoyed his third straight win since Niko Kovac was sacked earlier this month as Munich moved to within a point of Gladbach.

A top-of-the-table showdown beckons in a fortnight when Gladbach host Bayern at Borussia Park.

RB Leipzig can draw level on 24 points with Bayern if they win at home to strugglers Cologne later on Saturday evening.

Bayern routed Dusseldorf with goals by Philippe Coutinho, Serge Gnabry, Benjamin Pavard and Coretin Tolisso, with Robert Lewandowski failing to score in a league game for the first time this season and ending his record 11-match run.

However, it was the Poland forward who forced a corner from which Pavard scored the opening goal after 11 minutes.

His France team-mate Tolisso then doubled the lead in the 27th minute after Duesseldorf’s US international Zack Steffen surrendered possession.

Serge Gnabry, who scored a hat-trick in Germany’s 6-1 thrashing of Northern Ireland in mid-week, continued his goal-scoring run when he was presented with a simple tap-in by Thomas Mueller seven minutes later.

Lewandowski turned provider again with the 70th-minute cross which Coutinho swept into the net to complete the rout.

In Berlin, Gladbach suffered their third defeat this season as they became the latest top six club to lose to Union.

Having already beaten Dortmund and Freiburg this season at their Alten Foersterei stadium, Union took the lead with 15 minutes gone when Nigeria striker Anthony Ujah headed home a cross.

Union ensured their fourth straight league win in stoppage time when winger Julian Ryerson floated in a cross, which deflected off a Gladbach defender to present Swedish striker Sebastian Andersson with an easy header to round off a fine win.

Schalke climbed to fourth as striker Benito Raman and midfielder Amine Harit scored their goals in a 2-1 win at Werder Bremen, whose Japanese striker Yuya Osako grabbed a late consolation.

Freiburg are third despite only drawing 1-1 at ninth-placed Leverkusen.

The visitors took the lead after only five minutes when forward Lucas Hoeler headed home at the far post after slipping his marker.

But France Under-21 striker Moussa Diaby levelled on his first start for Leverkusen since joining from Paris Saint-Germain when he slotted home from 20 metres out midway through the first half.

Despite playing with 10 men for the entire second-half, mid-table Wolfsburg managed a 2-0 win at Eintracht Frankfurt.

Their goals came from towering Dutch striker Wout Weghorst and Brazilian forward Joao Victor despite losing defender Marcel Tisserand at the end of the first half for a second bookable offence.

Liverpool Leave It Late Again To Beat Palace
Meet Olunga, The Kenya Striker Who Scored 8 Goals In One Match (Photo)