Meet Olunga, The Kenya Striker Who Scored 8 Goals In One Match (Photo) 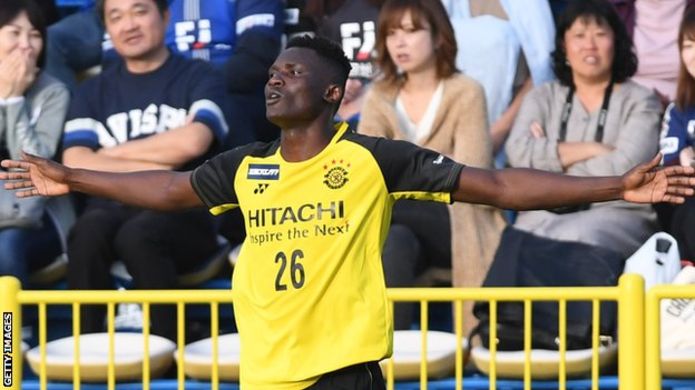 The 25-year-old completed his hat-trick before half-time and added another five after the break with his final goal coming in injury time at the end of the match.

His incredible feat took him to 27 goals in his 30 games for the club this season and help his side win the J2 League and promotion back to the top-flight just a season after being relegated, reports the BBC.

“What a way to end the season. Scoring 8 goals is more than I could ever imagine but by God’s grace it was possible,” Olunga posted on social media on Sunday.

“I want to thank everyone who supported me through out the campaign. Until next season. Gracias. God above all.”

Olunga scored for Kenya in their 1-1 draw with Egyptin a 2021 Africa Cup of Nations qualifier on November 14.

He also scored two of Kenya’s three goals at the 2019 Nations Cup finals in Egypt.

The striker began his overseas career in Sweden with Djurgardens before moving to Chinese club Guizhou Zhicheng, who loaned him to Girona in Spain before he signed for Kashiwa Reysol.

During his loan spell at Girona he became the first Kenyan and Girona player to score a hat-trick in La Liga as his side beat Las Palmas 6-0 in January 2018.