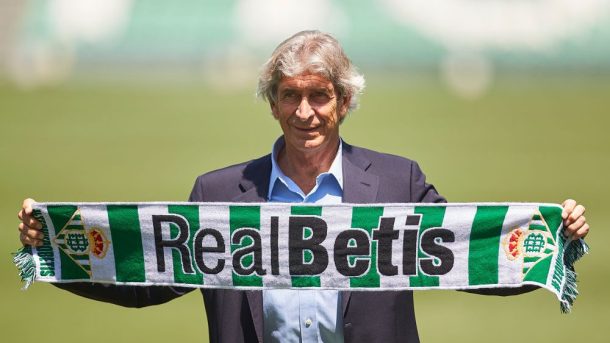 Manuel Pellegrini is back in a Spanish manager’s chair.

The ex-Man City and West Ham man has been hired by Real Betis, returning to La Liga for the first time since 2013 when he left Malaga.

Pellegrini, 66, has won silverware in five countries including England with a Premier League title with Man City in 2013-14 as well as two League Cups.

The Chilean has also won the Copa Chile with Universidad Catolica, Ecuador’s Serie A with LDU Quito, two trophies with Argentina’s San Lorenzo and another with River Plate, plus the Intertoto Cup with La Liga’s Villarreal.

Pellegrini has also led Real Madrid, where he won 75 percent of his matches, and Chinese Super League side Hebei China Fortune.

His last stint, with West Ham, did not prove fruitful but the side has not been much better under David Moyes.

The veteran manager will again be tasked with an underachieving side in Betis. Sitting 13th this season after a 10th place season in 2018-19, Betis expects a top-half side after gaining promotion back to the top flight for the 2015-16 season.

Betis has two matches left this season, home to Alaves and away to Real Valladolid. Those lower-half sides give Pellegrini a chance to start his stint in style.

We’ll be pulling for Pellegrini, a class act who had very little luck with a clearly murky West Ham atmosphere.