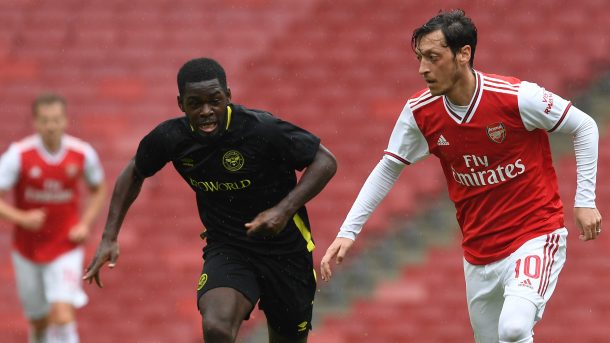 The New York Red Bulls are about to bring a young Championship midfielder to Major League Soccer.

Dru Yearwood is the name, a center midfielder who made his name with Southend United in League One before moving to Brentford this year.

Yearwood, who turned 20 in February, comes with a fee that could rise to just under $1.9 millionaccording to The Southend Echo.

The youngster made 61 appearances with seven assists for Southend United before moving to Brentford last summer, but he struggled to find regular time with the Bees in their push for Premier League promotion.

He made just five appearances for the Bees.

Will he make a big impact for Chris Armas’ side, which started Sean Davis and Cristhian Casseras in a win over Atlanta United this weekend?

If he does, he may one day net a big fee for the Red Bulls. He already has for Brentford, who bought him for about $600,000.

Manuel Pellegrini hired by Real Betis
The lastest two days of COVID-19 testing inside the MLS Tournament bubble in Orlando has resulted in no new positive cases according to a release from the league. From July 14-15, the MLS says 1,406 tests were performed on 1,124 separate individuals involved with their return to play tournament. No one from the 24 teams participating in the event or the two teams that had to withdraw from the tournament had any new positives tests over the two-day stretch. The previous two days of testing yielded just one positive test from a player from one of the two non-participating teams with over 1,200 negative tests. FC Dallas and Nashville SC both withdrew from the tournament before the event got underway due to many positive tests among those teams. A match between Toronto FC and D.C. United was postponed two days as a positive test and an inconclusive test led to the game being rescheduled. However, the MLS appears to have done a good job of making sure the virus hasn’t spread inside its bubble as the tournament nears the halfway point of pool play.