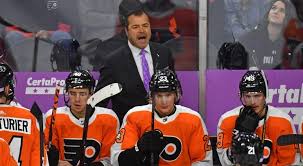 Bruce Cassidy of the Bruins, John Tortorella of the Blue Jackets, and Alain Vigneault of the Flyers have been named finalists for the 2019-20 Jack Adams Award, given to the head coach who has “contributed the most to his team’s success.”

All three head coaches aren’t strangers to being a finalist for the Jack Adams. This is Cassidy’s second time in the last three seasons in the top three, while Tortorella and Vigneault have been honored five times. Tortorella has won it twice (2003-04 and 2016-17), while Vigneault took home the award in 2006-07.

Barry Trotz of the Islanders was last season’s winner.

The NHL Broadcasters’ Association vote, with the winner announced during the conference finals.

The case for Bruce Cassidy: At the time of the March NHL pause Cassidy’s Bruins had the most points (100) and highest points percentage (.714) in the league. That success resulted in a Presidents’ Trophy for the franchise. Boston led the NHL in wins with 44 and hit the 40-win mark for the seventh straight season. Special teams played a big role in another strong year as the Bruins boasted the second-best power play (25.2%) and third-best penalty kill (84.3%). A win would make Cassidy the fourth coach in franchise history to win the award following Don Cherry (1975-76), Pat Burns (1997-98) and Claude Julien (2008-09).

The case for John Tortorella: Despite losing their two biggest stars in free agency, Tortorella’s Blue Jackets didn’t allow that to hold them back. Columbus surprised many and put themselves in position to be part of the NHL’s expanded Return to Play plan. During their final 41 games the Blue Jackets had two separate double-digit point streaks to keep them in the postseason mix. He’s the only coach in franchise history to have won the Jack Adams.

The case for Alain Vigneault: In his first season with the Flyers, Vigneault led them to a .645 points percentage at the time of the March pause and put them among the Eastern Conference’s top four seeds. A nine-game winning streak in mid-February help push them up the standings. He would become the fifth coach in franchise history to win the Jack Adams after Fred Shero (1973-74), Pat Quinn (1979-80), Mike Keenan (1984-85) and Bill Barber (2000-01).