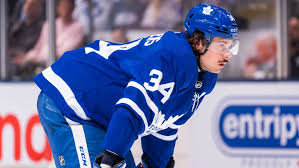 • On one hand, Auston Matthews didn’t make the call about being “outed” as having COVID-19. Even so, by openly discussing his experiences as training camps began, he broke the larger NHL pattern of silence on the matter. Chris Johnston explains why this is another example of Matthews marching to the beat of his own drum. [Sportsnet]

• Emily Kaplan conducted an in-depth interview with top NHLPA exec Donald Fehr on the CBA extension. Some interesting stuff here, including Fehr noting that the extension covers four years in large part to make sure that NHL players can participate in the 2026 Winter Olympics. [ESPN]

• Another one from Kaplan, this time on Brandon Hagel‘s path to the NHL, and how the pandemic also made it a more convoluted path to his second NHL game. Hagel played his first NHL contest with the Blackhawks on March 11, right before the pandemic shut things down. [ESPN]

• Golden Knights defenseman Nate Schmidt weighs the pros and cons of Las Vegas falling short of hub city status. Personally, I’m tickled by the line that you can’t go to “the grocery store where you know you could go and they have your favorite piece of fish or whatever.” [TSN]

• Canucks GM Jim Benning shot down rumors about the team pursuing trade options forBrock Boeser. While the rumors (via TSN 1040’s Matt Sekeres) seemed oddly timed, the Canucks’ cap crunch makes such talk at least understandable. We’ve seen GMs deny trade rumors and then eventually move said players, so we’ll see. But even if the Canucks trade Boeser when they can, they won’t have that ability for a while.

• So, now that Kirill Kaprizov finally signed with the Wild, how good can he be? Take a long look at what Kaprizov brings to the table. [Hockey Wilderness]

• Speaking of prospects, Blues fans are also excited about Scott Perunovich. Should they be? Based on this breakdown, it seems like the answer is a resounding “Yes.” [St. Louis Game Time]

• On face value, it sure seems like Seattle’s NHL expansion team could take advantage of other teams being under a cap crunch. GM Ron Francis discusses that possibility, plus more. [NHL to Seattle]

• Lyle Richardson forecasts some of the potential problems for the NHL’s new structure under the CBA extension. [Spector’s Hockey.