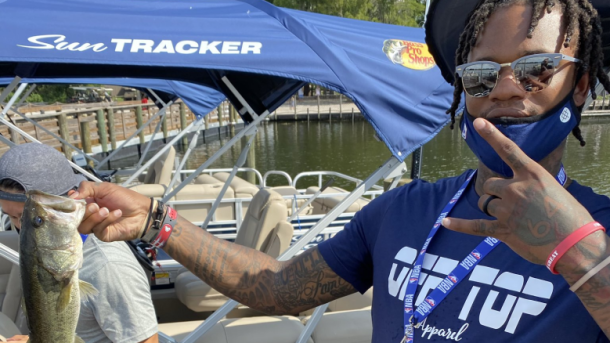 What are NBA players doing to pass the time inside the bubble? We know it’s not attending poolside DJ sets (unless you’re Dwight Howard). There’s been some golf and some cornhole games, but what are guys really doing with their time?

Fishing allowed on Lake Buena Vista on the Walt Disney World property, and NBA players are taking advantage. The most discussed NBA fisherman so far Philadelphia’s Ben Simmons — not because he caught something, but because he literally can’t throw a fish in the water standing next to a lake.

Ben Simmons throws fish back in the water with the wrong hand.pic.twitter.com/365wn4Imwh

(Insert your own joke about that looking like Simmons’ jump shot here.)

Simmons is not alone. Paul George caught a good-sized fish.

So did Luka Doncic.

🇺🇸 Nuggets and Mavs are off today. Doncic spent his day off going fishing, even if he doesn’t like eating fish

Doncic’s teammate Boban Marjanovic caught one as well, but it’s hard to tell if the fish is that small or Boban is just so huge it throws the perspective off.

Houston’s Ben McLemore and Robert Covington picked up the rod and reel.

Ben McLemore and Robert Covington fishing in the bubble.pic.twitter.com/jmtbOzQV7r

And then there is the Clippers Montrezl Harrell teaching Patrick Beverley how to fish whileLou Williams looks on.

This is all catch and release — nobody gets to take this back to the poolside grill, clean it, and cook it up. Just hope for the fish’s sake it’s not Ben Simmons doing the releasing.