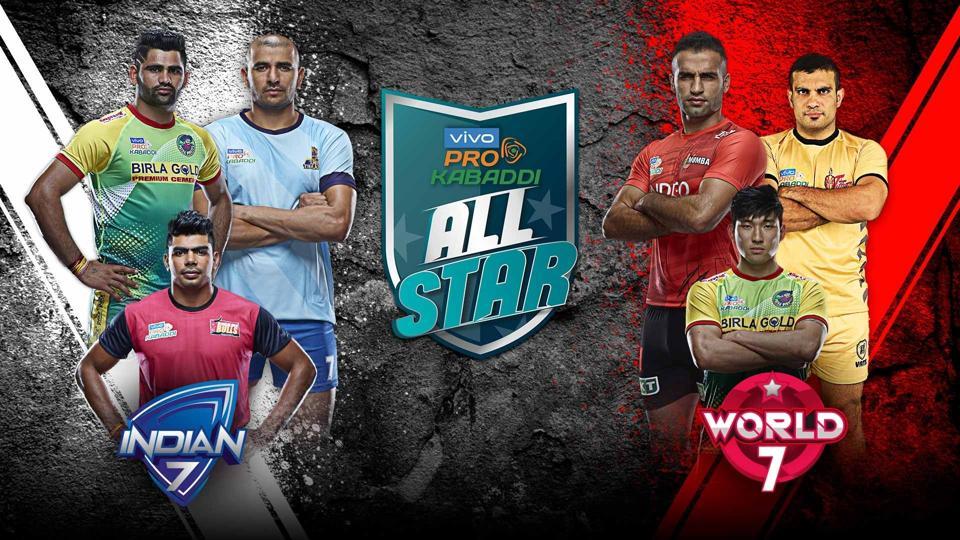 The wait is about to get over for the kabaddi fans as the league is set to resume on July 20. The first match of the Pro Kabaddi League Season 7 will see the Telugu Titans take on U Mumba at the Gachibowli Stadium in Hyderabad. But before the real action starts, Pro Kabaddi League has organised a one-of-a-kind All-Star match on Saturday at the same stadium in Hyderabad.

All-Star Rivalries to look out for:

1. Balwan Singh vs EP Rao – It will be game to watch out for when two of the most experienced coaching minds battle it out off the mat. It will be a truly #issetoughkuchnahi match – who will emerge victorious?

3. Nitesh Kumar (UP Yoddha) vs Mohammad Esmaeil Nabibakhsh (Bengal Warriors) – Nitesh is an FKH player from Season 5 who has shone to the highest level with his defensive prowess and made it to the inaugural edition of the All-Star match. Will he play a key role in stopping Nabibaksh who begins his PKL career with a direct entry into All Star?

4. Pawan Sehrawat (Bengaluru Bulls) + Pardeep Narwal (Patna Pirates) vs Fazel Atrachali (U Mumba) and Abozar Mohajermighani (Telugu Titans) – While one is known for his seamless ‘dubkis’, the other is known for his famous frog jumps. Their lethal combination has scored 504 raid points last season. Can they take the Indian 7 past the tough defence line-up of World 7?

7 things to Expect in the PKL 7 All-Star Match:

•In the history of Kabaddi, this is the very first time that an All-Star match is organised where the best of talents come together to battle it out in a prestigious match

•The league returns to Hyderabad at the Gachibowli stadium, and begins with this massive clash where fans across the state will be in for a treat like never before; a game that will have nerves on the edge from start to end

•Both teams have the best coaches to train them for the match; Team Indian 7 will be coached by Balwan Singh, and Team World 7 will be under the guidance of E.P. Rao a.k.a Kabaddi Rao.

•Indian 7 will have the nation’s star Kabaddi players perform together for the first time in the history of the sport; some of the names include Ajay Thakur, Pardeep Narwal and Pawan Sehrawat

•Team World 7 will compete with the best of International talent that the sport has ever seen with popular names such as Mohammad Esmaeil Nabibakhsh, Abozar Mohajermighani, Fazel Atrachalli, and Jang Kun Lee

•The combination of raiders and defenders in this match would be an interesting factor, when the best come together what strategy, game-plan and techniques will viewers get to see – can we expect something new when great minds come together?

•This is a free for all match, fans can come watch this match LIVE at the Gachibowli stadium on first-cum-first serve basis – what more can we ask for, when a game of this stature is played?

WHEN and WHERE to watch: