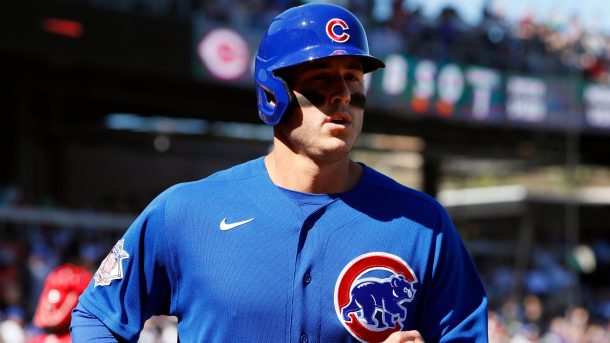 Cubs first baseman Anthony Rizzo underwent an MRI on Tuesday that revealed rib inflammation on his left side, Maddie Lee of NBC Sports Chicago reports. Rizzo has been dealing with back soreness for the last week and has missed several intrasquad games as a result.

Rizzo is unsure if he can avoid opening the regular season on the injured list. He said, “I’ll do everything I can to stay off of it, obviously. … Every game’s important. So, we’ve got to get off to a good start and hopefully I’m out there with the guys. I plan on it, but you can’t control it and you’ve got to be smart.”

Rizzo, who turns 31 years old next month, is coming off of another highly productive season in which he hit .293/.405/.520 with 27 home runs, 94 RBI, and 89 runs scored over 613 plate appearances. In the event he needs to open the season on the IL, Victor Caratini figures to get the first crack at handling first base.

The Cubs missed the playoffs last year for the first time since 2014, finishing in third place with a 84-78 record. Rizzo, no doubt, will play a big role if the Cubs are to find themselves back in the postseason.