Myles Garrett to Browns: Keep betting on me, I won’t let you down 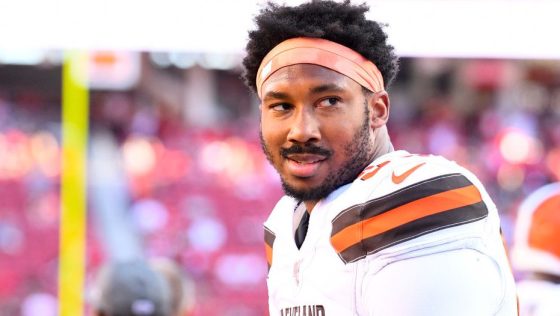 Browns defensive end Myles Garrett shared videoof his contract signing on Wednesday afternoon and the Browns made their official announcement of his extension a short time later.

It’s believed to be a five-year, $125 million deal for a player that General Manager Andrew Berry said has the “make-up and performance” are essential characteristics for core members of their team. Berry also referenced Garrett’s 2019 suspension for hitting Steelers quarterback Mason Rudolph in the head with a helmet.

Berry said Garrett has been “accountable” and that the team doesn’t “believe one moment should define him” as a player or a person. In his own comments about the extension, Garrett thanked the team for continuing to believe in him.

“In 2017, the Cleveland Browns bet on me,” Garrett said in a statement. “This city quickly became my home and these people quickly became my family. I’m eternally grateful for this opportunity, the support of my friends and family, the organization, my teammates, the fans — I could go on forever, but even that wouldn’t be enough time to express my gratitude. I’ll just say this: Keep betting on me, Cleveland, because I won’t let you down. Now, let’s get to work.”

Garrett’s deal carries the highest average annual salary of any defensive player in the league and the 24-year-old would be positioned for another sizable contract if he continues to play at the level he’s shown over his first three seasons.