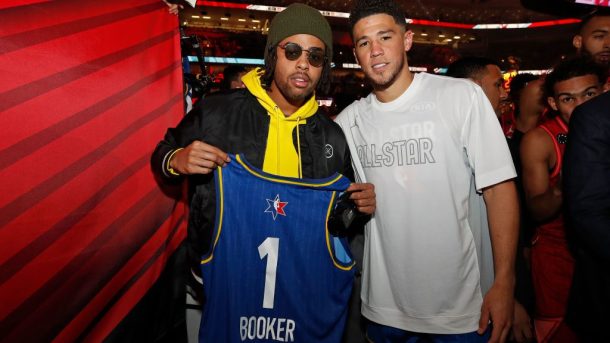 As Devin Booker campaigned for them to sign his friend D’Angelo Russell last summer, the Suns reportedly resisted due to concerns about how Russell would influence Booker.

Booker, per league sources, wasn’t happy with the organization at the time of the report.

Not signing Russell might have been the right call. A Russell-Booker backcourt would’ve been woeful defensively, and there were maturity concerns with Russell. Appeasing Booker this way might have reinforced bad habits. The Suns instead signed Ricky Rubio, and he has helped at point guard.

Yet, even if Phoenix was right, Booker’s perception also matters. Nobody can ever know what would’ve happened if the Suns signed Russell. If Booker believes the team erred, it could contribute to him eventually leaving Phoenix.

The important question: How does Booker feel about the Suns now?

They’re having their best season since drafting him. They’re also 26-39.

His friends, Russell and Karl-Anthony Towns, teamed up on the Timberwolves. Those two appear quite happy in Minnesota.

Booker has already shown impatience with the Suns, and their modest upgrades last offseason came at substantial long-term costs. Trade speculation is emerging.

But Booker signed a contract extension that ties him to Phoenix through 2024. He has capitalized on his considerable talent and become a worthy All-Star at just 23. The Suns certainly won’t rush to trade him, even if he’s a little displeased with the organization.

Ultimately, it’s on Phoenix to impress Booker before he gains enough leverage to leave. The best way: Winning. Not signing Russell was one of the many complicated decisions the Suns have made in pursuit of that goal.

With the runway provided by Booker’s long contract, there will almost certainly be many more.

Dwight Howard admits he got warned for not wearing mask
Following Jimmy Butler’s lead, 30 players requested no name on back of jersey