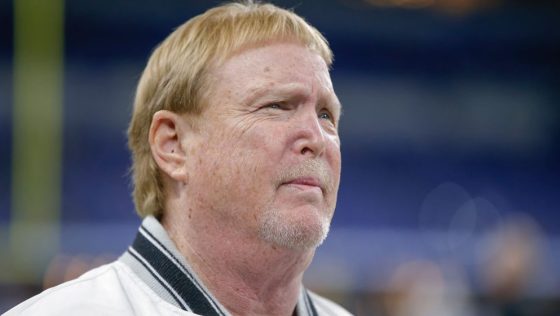 Raiders owner Mark Davis has made a bold proclamation as it relates to his team’s first season in Las Vegas. If fans can’t attend home games in person, Davis won’t attend, either.

“I won’t go if the fans can’t go, and the way it looks right now there won’t be any fans at our games,” Davis said Saturday, via Vic Tafur of TheAthletic.com.

Davis also makes it clear that a partial-capacity arrangement won’t work at the team’s new stadium.

“It’s all or none for me,” Davis said. “Either all the fans are going to be in there or none. . . . I can’t tell one fan that they can’t go to the inaugural opening game in a stadium that they helped to build through their PSLs. I won’t tell them that they can’t go but the rest of these guys can . . . and oh, by the way, don’t worry about it because we’ll be able to advertise on your seats.”

Davis voted against using tarps over the first eight rows of seats this season, the only owner who opposed the effort to create a buffer between the general public and players. At a minimum, then, he’ll have to displace those fans — if the stadium somehow is otherwise full.

The league, the union, the state, and/or the city may have something to say about the all-or-nothing approach. With revenue due to take a massive hit as a result of reduced or non-existent attendance, every team should embrace the opportunity to generate as much ticket revenue as possible. Beyond his duty to those who own a piece of the franchise along with him, Davis arguably has a duty to generate as much revenue as he can, for the benefit of Nevada, of Las Vegas, of his 31 fellow owners, and of the players.

Davis likely knows this. But the fact that he’d ultimately have to relent doesn’t keep him from adopting a stance that will be popular with his fans and that will advance and cement his reputation as a renegade.