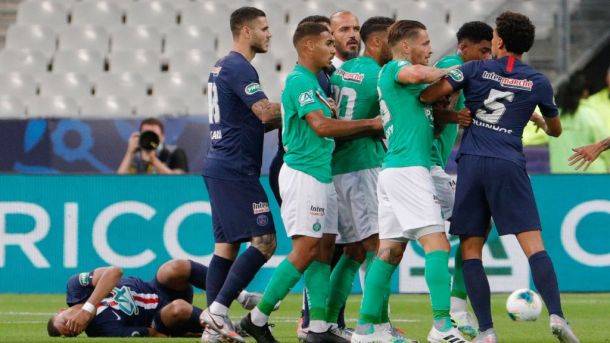 PSG fans will be sweating on a Kylian Mbappe injury update, as he was forced off during the first half of the French Cup final on Friday.

Mbappe, 21, was clattered by a hefty tackle from Saint Etienne man Loic Perrin, who was sent off, as the French star caught his ankle underneath Perrin’s leg and he turned his ankle.

A melee then ensued as players from both teams jumped in and tempers flared as Perrin, who was initially given a yellow card, was sent off after VAR intervened.

Mbappe was able to walk off the pitch, with plenty of help from the PSG medical staff, as he looked distressed and close to tears after the hefty challenge left him injured but it could have been even worse. In the second half he appeared on crutches and with a support on his right ankle.

This could be a really nasty one for Mbappe, as PSG will now be sweating on his fitness ahead of their UEFA Champions League quarterfinal against Atalanta on Aug. 12 in Portugal.

Many are pointing to the fact that Mbappe was just named as the cover star of EA Sports’ FIFA 21 video game, and believe a curse has struck him.

PSG and Mbappe have played in two friendly games against Le Havre and Celtic recently after the Ligue 1 season was ended early during the coronavirus pandemic.

Mbappe has been in sensational form for PSG all season long and if the French giants lose him to injury, it puts a huge dent in their hopes to finally win the Champions League.

Take a look at the video below at the tackle and then Mbappe walking back out to the bench on crutches and his right foot wrapped up.

Kylian Mbappe subbed off for #PSG after this horrific tackle from Loic Perrin, who was sent off for Saint-Etienne.

Looks like damaged ankle ligaments for Mbappe. Not looking good, at all. pic.twitter.com/Df405Krq6w

🤕 @KMbappe comes out to the bench in crutches after the hard tackle he took in the first half#PSGASSE #CoupeDeFrance pic.twitter.com/0gGFHsUyNh