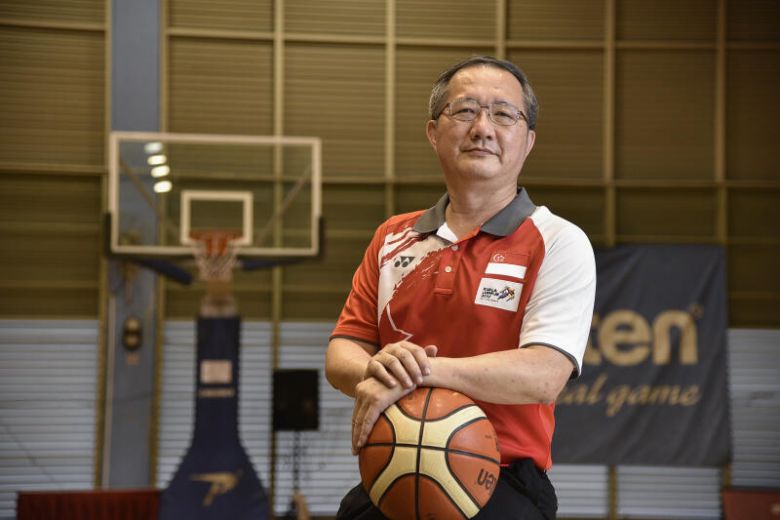 Since the men’s team won their first SEA Games medal in 34 years by finishing third at the 2013 SEA Games, they have been unable to break through the glass ceiling. They retained bronze at home in 2015, before losing the bronze-medal playoff in 2017 and failing to reach the semi-final last year.

In an interview with The Straits Times in March, when Neo replaced Hsu Tung-ching after his contract ended, Basketball Association of Singapore (BAS) president Hoo Boon Hock set Neo the target of a medal at next year’s SEA Games. Neo is confident his team can deliver despite facing numerous challenges.

The 55-year-old, whose term runs until the end of next year’s Hanoi Games, was assistant coach to Neo Beng Siang in 2015 and Frank Arsego in 2017. He saw how Singapore trailed Thailand by just three points after three quarters in the 2017 bronze-medal play-off in Kuala Lumpur, but were overpowered in the final period to lose 65-55.

Neo said: “There is not much recovery time between games in international tournaments, we may play once every two days, or even every day so fitness is very important.

“With many teams having naturalised players, we are not the biggest team, so we need to be better in other areas.”

This includes field-goal shooting percentage, which was below 40 per cent at last year’s SEA Games in the Philippines.

While Neo knows he can count on 31-year-old guard Wong Wei Long and 23-year-old swingman Leon Kwek to shoot well, he challenged his side to be more consistent and to average 45 per cent shooting.

Top of Neo’s wish list is to engage a short-term shooting coach for his players as well as a strength and conditioning specialist. He also wants to take his team for more frequent overseas training camps where they can build understanding and play against strong opponents. Previously, the national team would scrimmage against the expat community if they are unable to travel.

The defence-oriented coach said: “We definitely need to play against quality opposition to get used to the high-intensity games at international level.

“We recognise we cannot do all these on our own, and we will work closely with Sport Singapore to get their strong support to realise our aim of getting to the next level.”

He is also looking to build for the future even though he has up-and-coming players like 23-year-old guards Kelvin Lim and Lim Jun Yuan at his disposal.

After all, his wealth of experience from over three decades in the local basketball fraternity was a key reason why he emerged top of a three-man shortlist for the job.

The former point guard – part of the national team that finished a respectable 10th out of 18 teams at the 1991 Asian Basketball Championship – coached at schools level and led the national Under-16 and Under-18 boys’ teams before his stint as national assistant coach.

BAS coaching and development chairman Allen Lee said: “He has a good understanding of the local ecosystem and provides continuity from having been an assistant coach at recent SEA Games.”

Despite the coronavirus pandemic forcing sport to a standstill for months, Neo has not been idle.

Scouting the Singapore Slingers, National Basketball League (NBL), NBL qualifying rounds and Institute-Varsity-Polytechnic scene, he has a long list of 44 players for the national selection squad.

“We want to have a sustainable training plan,” said Neo, who pointed out that national team trainings sometimes do not have the numbers because of work, study or National Service commitments.

“The team will be cut to 12 when we go for competitions, but there will be opportunities for many because of the various commitments…

“We need constant renewal and fresh batches of talents coming in to challenge them. We believe there are talents out there in a vibrant local basketball scene and we will look for them.”