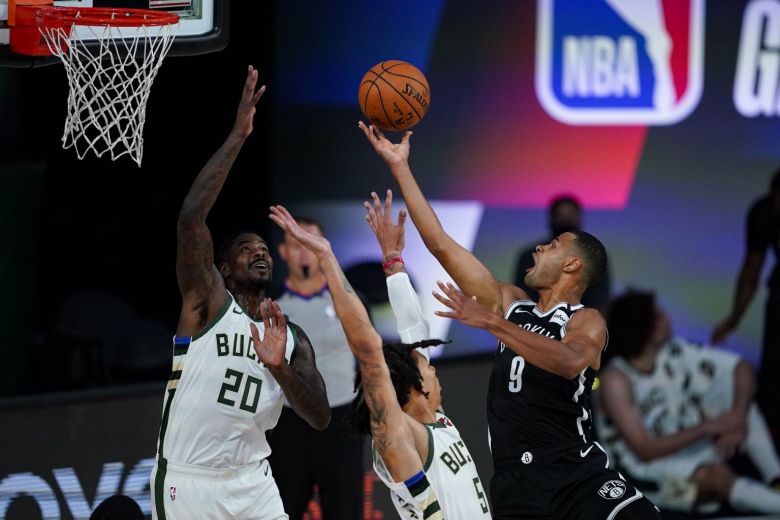 ORLANDO (AFP) – Timothe Luwawu-Cabarrot scored a career-high 26 points as the Brooklyn Nets kept the Milwaukee Bucks waiting to clinch top spot in the Eastern Conference with an upset 119-116 win on Tuesday (Aug 4).

Luwawu-Cabarrot nailed consecutive three-pointers in the closing stages to set up a come-from-behind win over the Bucks, who could have sealed first place in the East with a victory.

It was a second straight loss for the Bucks, who were also beaten by the Houston Rockets in Orlando on Sunday.

Milwaukee, the runaway leaders of the Eastern Conference with 54 wins against 14 defeats, will get another chance to lock up top spot against the Miami Heat on Thursday.

Injury-depleted Brooklyn, meanwhile, remain on track to clinch the eighth and final playoff place from the Eastern Conference.

Luwawu-Cabarrot’s late intervention in the fourth quarter eventually tipped the game in Brooklyn’s favour with just under three minutes left.

A three-pointer from the 25-year-old Frenchman put the Nets ahead at 112-110, and then a second three-pointer with 2min 31sec remaining gave Brooklyn a five-point cushion at 115-110.

A Kyle Korver jump shot took the Bucks to back within one point at 115-114 with just under two minutes remaining, but Tyler Johnson’s layup put Brooklyn three points clear soon afterwards.

Donte DiVincenzo narrowed the deficit to one point with a running layup but Garrett Temple then hit back for Brooklyn to complete the scoring at 119-116.

Luwawu-Cabarrot led the scoring for Brooklyn with backing from Temple (19 points) and Johnson (11).

The Nets were without Jarrett Allen, Joe Harris, or Caris LeVert, as well as long-term absentees Kyrie Irving and Kevin Durant.

Meanwhile Giannis Antetokounmpo led the Bucks scoring with 16 points from his 15 minutes on court before sitting out the second half.

The NBA regular season resumed last week after a four-month shutdown due to the coronavirus pandemic.

Twenty-two teams are playing at a single site inside a secure zone at Disney World in Orlando, Florida, to determine the final playoff line-up.

The post-season gets under way on Aug 17.