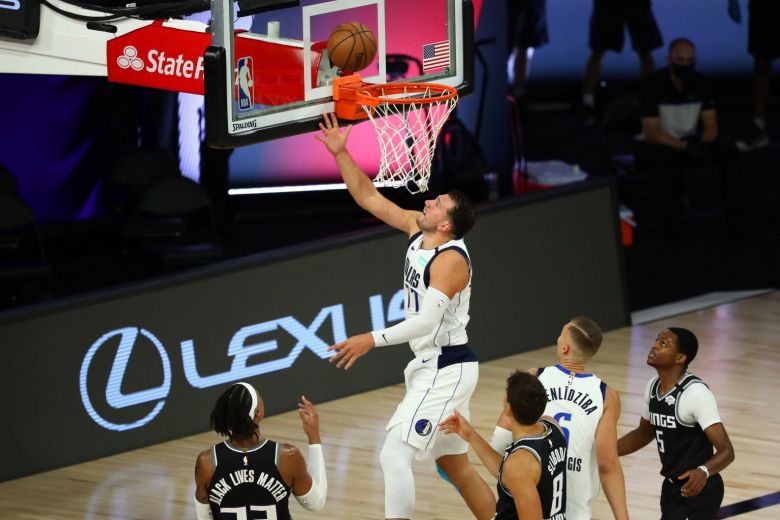 ORLANDO, FLORIDA (FIELD LEVEL MEDIA REUTERS) – Luka Doncic capped a 34-point, 20-rebound, 12-assist triple-double with a basket inside to break a tie with 1:57 remaining in overtime Tuesday afternoon (Aug 4) as the Dallas Mavericks outlasted the Sacramento Kings for a 114-110 victory.

Tim Hardaway Jr had six of his 22 points in the extra session, helping the Mavericks (41-29) win for the first time in three tries in the NBA bubble.

De’Aaron Fox went for a team-high 28 points for the Kings (28-39), who fell to the brink of elimination in the Western Conference playoff race with a third straight defeat since the restart.

A Buddy Hield 3-pointer gave Sacramento a 102-99 lead with 3:30 left in overtime before Hardaway was fouled on a 3-point attempt and converted three straight free throws for the game’s final tie at 102-all.

Doncic then connected on his go-ahead hoop and Maxi Kleber then hit a 3-pointer with 1:22 to go, propelling the Mavericks to the win.

The Kings got threes from Hield and Bogdan Bogdanovic in the final 10 seconds to close within 112-110, but Trey Burke nailed two free throws with 4.4 seconds remaining to ice Dallas’ win.

The Mavericks rallied into a 52-all tie on a pair of free throws by Kristaps Porzingis with 2:46 remaining in the half, but then never drew even again until Kleber hit one of two foul shots with 1:52 remaining, squaring the score at 95-all.

The teams combined for seven missed shots and a turnover over the scoreless final 1:52 of regulation. Fox missed three of the shots, including a buzzer-beating 18-footer.

Doncic’s triple-double was his league-leading 16th of the season, while his 20 rebounds were a career-high, eclipsing his previous best of 18 set against New Orleans in December.

Fox added a team-high nine assists for the Kings, who outshot the Mavericks 41.3 percent to 36.7.

Hield added 21 points and Kent Bazemore 16 for Sacramento, while Nemanja Bjelica had a double-double with 12 points and a team-high 13 rebounds.