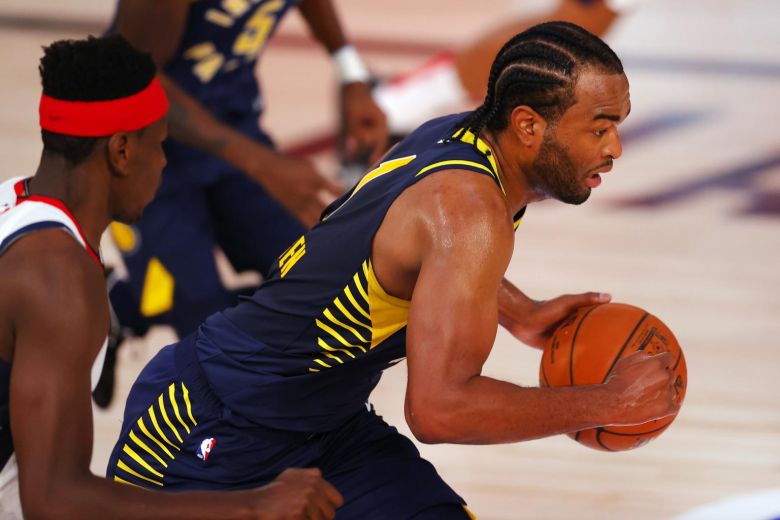 ORLANDO (REUTERS) – T.J. Warren recorded a game-high 34 points as the Indiana Pacers scored 22 of the final 24 points in the third quarter to help his team pull away from the Washington Wizards in a 111-100 victory on Monday (Aug 3) near Orlando.

Malcolm Brogdon chipped in with 20 points, seven rebounds and a team-high six assists for the Pacers (41-26), who have won both their games since the restart of the National Basketball Association (NBA) season.

Thomas Bryant had 20 points to pace the Wizards (24-43), who fell to the brink of elimination from the Eastern Conference play-off chase with their third straight loss.

After a tight first half that featured nine lead changes and four ties, the Wizards got within 68-66 on a Bryant three-pointer with 5min 25sec remaining in the third period.

The rest of the quarter belonged to the Pacers, however, with Myles Turner igniting a 22-2 burst with a dunk.

Warren had two traditional three-point plays in the decisive run.

Washington got no closer than seven the rest of the way, the last time when Isaac Bonga dropped in a lay-up to cut the gap to 107-100 with 1:16 to play.

But Aaron Holiday iced the win with two free throws with 42.0 seconds remaining.

On the heels of a 53-point eruption in which he shot 20-for-29 and hit nine three-pointers, Warren shot 14-for-26, albeit with just one three-pointer against the Wizards. He completed a double-double with a team-high 11 rebounds.

Turner (17 points) and Holiday (17) also scored in double figures for Indiana, who completed a sweep of the season series.

Bryant, who had 30 points and 13 rebounds in Sunday’s 118-110 loss to Brooklyn, recorded his second consecutive double-double with 11 rebounds.

Jerome Robinson finished with 17 points and Shabazz Napier 16 off the bench for Washington. Ish Smith added 12 points and Troy Brown Jr 10 for the Wizards.

In another game, Nikola Jokic scored eight of his 30 points in overtime to help the Denver Nuggets to a 121-113 win over the Oklahoma City Thunder.

With the Nuggets down three starters due to injury, Michael Porter Jr moved into the starting line-up and had a career-high game, leading Denver with 37 points.

But late in regulation and overtime, it was Jokic who took control. He scored five points in the final 2:04 of regulation to help the Nuggets force overtime after they fell behind by seven with less than four minutes remaining.

He finished with 12 rebounds and 10 assists.

Denver (44-23) were without starters Will Barton (knee), Gary Harris (hip) and Jamal Murray (hamstring) for the second consecutive game in the NBA’s restart.

The Nuggets were disjointed in a loss to Miami in their first game back from the long layoff, but that was not the case against the Thunder, thanks in large part to Porter’s strong performance. He finished 12 of 16 from the field with 12 rebounds.

The Nuggets tied a season-high with 39 free-throw attempts.

Each team had a chance to win in the closing seconds of regulation.

First, with the Nuggets up one, Chris Paul was fouled by Paul Millsap with 2.9 seconds left.

Paul missed the first and had to hit the second to salvage a tie.

Denver had a shot to win at the buzzer, but Troy Daniels’ runner at the buzzer hit off the back of the rim, sending the game to overtime.

The Thunder were without two key bench players.

Small forward Terrance Ferguson missed the game with a leg contusion. Thunder coach Billy Donovan said he expected Ferguson to be available for Wednesday’s game against the Lakers.

Dennis Schroder’s absence is expected to be longer. Schroder, one of the leading candidates for Sixth Man of the Year honours, left the bubble on Monday for the birth of his second child. Players who leave the bubble for an excused absence must quarantine for four days upon returning to the Disney complex as long as they test negative for Covid-19 each day during their absence.