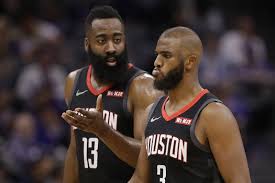 n the aftermath of their loss to the Golden State Warriors in the second round of the playoffs, there have been plenty of rumors and reports about the Houston Rockets shaking things up this summer. Everyone on the team is available in a trade, per multiple reports, and they’ve struggled to come to an agreement with head coach Mike D’Antoni on a contract extension.

But now, after Kevin Durant suffered a torn Achilles in Game 5 of the NBA Finals and Klay Thompson went down with a torn ACL in Game 6, their nemesis has all of a sudden been neutralized. If ever there was a reason for the Rockets to just run things back and try again next season, the Warriors’ injury problems have provided one.

The problem is that the Rockets‘ only failures weren’t on the court last season. According to an in-depth profile of the team by Tim MacMahon, there’s a festering divide between their two stars, James Harden and Chris Paul. From passive aggressive postgame press conference moments, to cutting remarks during and after games, to philosophical differences on offense, Harden and Paul struggled to coexist at times.