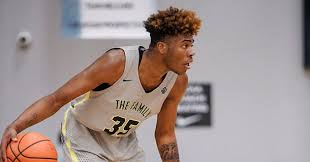 Terry Armstrong is taking his talents to Australia.

ESPN’s 40th-ranked prospect of the 2020 NBA Draft will play overseas professional basketball in Australia — instead of playing college basketball for one season and going pro, according to Jonathan Givony of ESPN. He joins LaMelo Ball and RJ Hampton as top prospects that are foregoing the traditional one-and-done rule in order to play pro basketball before joining the NBA.

Armstrong, the No. 40 prospect in the ESPN 2020 mock draft, will join projected No. 6 prospect RJ Hampton and No. 24 prospect LaMelo Ball as American teenagers who elected to spend their one-and-done season between high school and the NBA in the NBL. Hampton signed with the New Zealand Breakers in late May and Ball with the Illawara Hawks in mid-June. All three were brought in under the NBL’s Next Stars program, which has emerged as a competitor with college basketball and the G League as pathways to the NBA.”

Armstrong is a four-star recruit from Scottsdale, Arizona who had previously committed to the Arizona Wildcats. However, in order to become eligible he had to take summer classes at Arizona to boost up his insufficient GPA. The shooting guard prospect is instead electing to bypass those summer classes for a professional basketball contract as others from his class have decided to do.

The 6-foot-6 prospect spoke of his decision to join the Australian basketball league instead of playing in his hometown of Arizona, citing the stiffer competition which will prepare him for the NBA.

“The NBL is one of the most competitive leagues in the world,” Armstrong said. “Australia has a rabid fan base and a proven track record of putting players in the NBA. In addition, there is a strong focus on development and a season which consists of 32 games which lends itself to more developmental rigor. I’ll have a chance to train with some of the best professional coaches and trainers in the world, so that is a very attractive situation for me.”

Armstrong will join the Phoenix in late July as he’ll look to increase his draft stock for 2020 in the nine-team league.