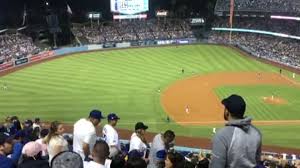 The San Diego Padres and Los Angeles Dodgers were minding their own business on Friday night when the ground started shaking. That isn’t a metaphor or simile or anything of the sort — it’s a description of what happened. During the bottom of the fourth inning, Dodgers Stadium shook thanks to the aftershocks of a magnitude 7.1 earthquake.

Preliminary reports of a 7.1 magnitude #Earthquake in #California. pic.twitter.com/hRxtA9WCMh

— KTNV Action News (@KTNV) July 6, 2019
Unlike the National Basketball Association, who stopped Summer League play in Las Vegas, Nevada, the Dodgers and Padres played on as if nothing was amiss. Take a look:

— Los Angeles Dodgers (@Dodgers) July 6, 2019
If it weren’t for the camera, you never would’ve known, right? Credit to Padres southpaw Eric Lauer, who seemed like he was not at all bothered by the whole ordeal and kept pitching like it was nothing.

Here’s another view, from the bleachers:

HAPPENING NOW — 5.1 earthquake in LA. Currently, we are inside Dodger Stadium, sitting down the right field line. The whole upper deck was shaking. Experienced a brief few minutes of chaos but all is fine now. The players continued like nothing happened. @SpecNews1SoCal pic.twitter.com/KGdqy8u8wV

— Samantha-Jo Roth (@SamanthaJoRoth) July 6, 2019
To recap: the Dodgers and Padres played through an earthquake, or the aftershocks of one, like it was no big deal.

This was the second earthquake to impact the California area in as many days. On July 4, a magnitude 6.4 earthquake affected southern California.