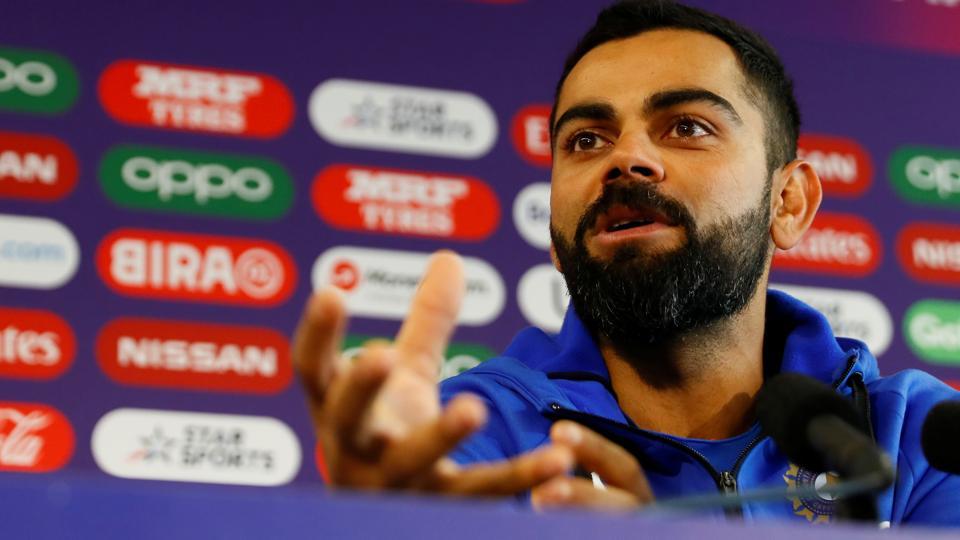 India skipper Virat Kohli had a hilarious reply for the press ahead of their ICC World Cup 2019 encounter against New Zealand when he was reminded that he was the one who took the wicket of his counterpart Kane Williamson when they faced each other in the 2008 U-19 World Cup. The Indian cricket team skipper had everybody in splits when he said that he is a lethal bowler and can roll his arm over any time the team needs but the only thing he has to be careful about is not slipping on the pitch at the time of delivery.

“We played with 5 bowling options because it gives more depth in batting. I can bowl anytime. I am lethal as long as I don’t slip on the pitch. We are up to reviewing that. 5 bowlers has worked well,” Kohli said at the pre-match press conference on Monday.

About the Williamson wicket, he said that it is doubtful that he will be able to repeat that feat on Tuesday.

“I got Kane’s wicket? Did I? I don’t know if that can happen again now.”

The skipper also spoke about KL Rahul and the bowling attack as well as addressed the issue of handling pressure. “The mood is great, everyone is relaxed and confident. All teams work hard to get to these moments. Now whoever plays well on the day wins. It’s been a lot of hard work and intense games. There’s only opportunity that lies in front of us,” the skipper said.

14.3K
6:54 AM – Jul 8, 2019
1,969 people are talking about this
Twitter Ads info and privacy
Kohli also said that the environment in the camp was upbeat, although it was different compared to the league phases. “It’s a bit different (mindset for knockouts) to be honest. League stages you can try a few things. Knockouts you have to be intense. Both teams are experienced enough to play these games. Whichever is braver in being calculative stands a chance to win,” the captain further added.

“If we’re in a situation where the opening partnership is strong and someone has to go at No. 3 to strike big, we’re absolutely open to do that too,” Kohli said.

PSG to take action after Neymar skips training
Kevin Pietersen gives his prediction for World Cup 2019 semi-finals, reckons India and England to come out on top