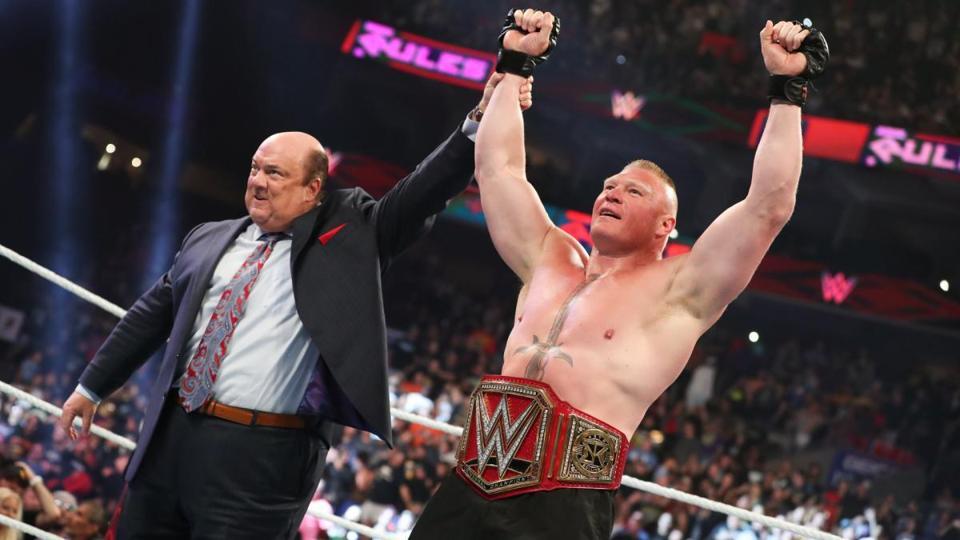 Paul Heyman had given a SPOILER to the WWE Universe that Brock Lesnar will cash-in his Money in the Bank contract at Extreme Rules. But the fans have grown skeptical of these spoilers as in the past Lesnar and WWE have misinformed them about the cash-in. Heyman had himself stated on last week’s Monday Night Raw that Lesnar might or might not cash-in his contract. So did Heyman and Lesnar stay true to their words?

Universal Champion Seth Rollins was teaming up with Raw Women’s champion Becky Lynch and were facing the duo of Baron Corbin and Lacey Evans in a winner-take-all Mixed Tag Team match.

In a brutal match, Rollins became enraged when Corbin hit an End of Days to his real-life girlfriend Lynch. This prompted Rollins to dismantle Corbin with a steel chair and kendo stick before hitting three Stomps to pick up the victory.

However, the ominous music of Lesnar hit as soon as the referee counted three. This time Lesnar did came out, Lesnar did cash-in his Money in the Bank contract and Lesnar did become the new Universal champion.

No misdirection from the WWE this time as Lesnar hit German Supplexes and a F5 on Rollins to become a three-time Universal champion.

WWE Universe had always complained about the infrequent appearances of Lesnar on TV and even argued that his championship reign devalued the title. Fans and pundits celebrated Rollins’ victory over The Beast as they expected the Universal Championship to become a noteworthy segment on Raw rather than a footnote.

Now Lesnar is again the champion and holder of the top title in WWE. Fans shouldn’t be disheartened as it has been reported that Lesnar will make more appearances on TV after signing a new contract. So there is hope that we could see Lesnar defend the Universal Championship in this reign unlike the previous ones.

But that is the only thing we have. HOPE.

WWE Extreme Rules Live Streaming: When and Where to Watch, Live Coverage on TV and Online
Stone Cold Steve Austin, Shawn Michaels and Hulk Hogan- Full list of superstars who are returning at WWE RAW Reunion