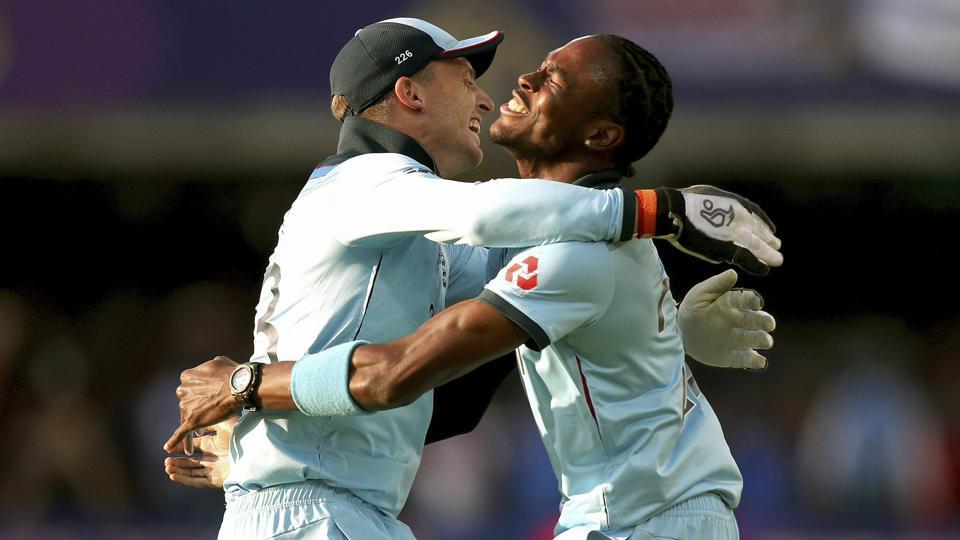 Reassuring words by England all-rounder Ben Stokes helped Jofra Archer overcome nerves before the Super Over that won the hosts their maiden cricket World Cup crown in an extraordinary final against New Zealand on Sunday, the fast bowler said.

England set New Zealand a victory target of 16 runs in the Super over after both teams were tied on 241 after 50 overs, and Archer conceded only 15 to deliver the title for the hosts on boundary count.

The trophy had briefly appeared to slip from England’s grasp when the 24-year-old started the Super Over with a wide before Jimmy Neesham struck him for a six to leave the Black Caps needing seven runs from four balls.

ALSO READ: What rules say – Should England have got five, not six for overthrows?

“I think it was going fine until the six … Stokes told me before the over ‘win or lose, today doesn’t define you. Everyone believes in you’,” Barbados-born Archer, who made his England debut in May, told reporters.

Stokes is no stranger to heartbreak in a high-pressure game, having conceded four successive sixes in the T20 World Cup final loss to the West Indies in Kolkata three years ago.

“He came to talk to me because of that. He probably went through the same emotions, the same feelings but being on the losing side,” Archer added.

“If we had lost today, I don’t know what I would have done tomorrow. To back up what he said, if we did lose there’s a T20 (World Cup) next year and I’d have another chance.

“(Joe) Root came up to me and said some inspirational words as well. I knew if we did lose, it wasn’t the end of the world. I’m glad the guys look up to me and trust me to do it.”

“England do not win World Cups very often but when they do, blimey, they make the nation suffer for its glory,” wrote Matt Dickinson in the Times.

“After extra-time for Bobby Moore and England’s footballers in 1966, and again for Martin Johnson and his rugby union heroes in 2003, a Super Over at Lord’s made this the most beautifully spectacular way for Morgan’s side to make history.”

Barney Ronay wrote in The Guardian: “A World Cup win is a vindication on many levels.

“For the players, whose names will now live in English cricket lore as the nation’s first ever 50-over champions, it’s a triumph of skill, hard work and modernising brio.”

ICC World Cup Final, England vs New Zealand: This was meant to be, says Plunkett after England’s World Cup glory
ICC World Cup 2019: All elements came together to hand England their maiden crown