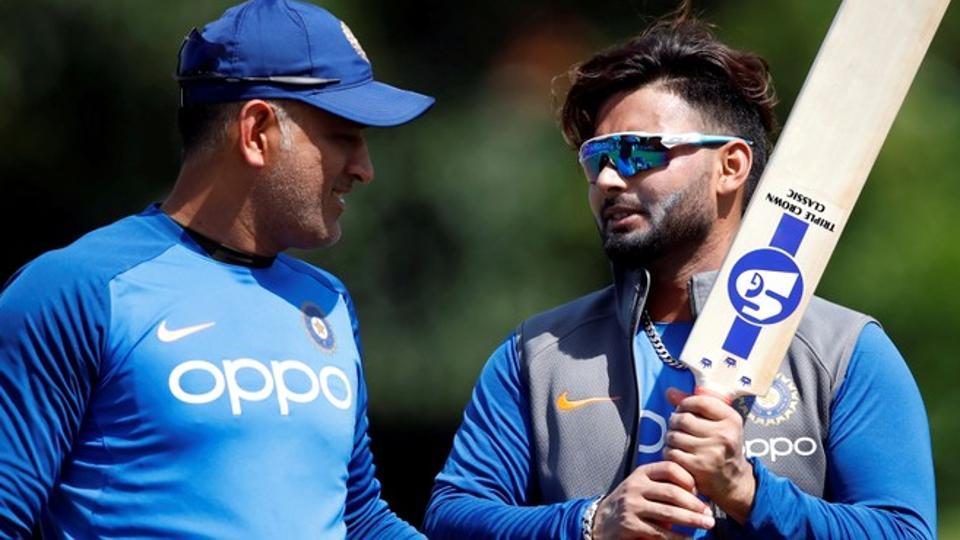 Rishabh Pant has been declared the future while Mahendra Singh Dhoni doesn’t figure in India team’s future plans. This was made clear by chief selector MSK Prasad while announcing the teams for the upcoming series against West Indies here on Sunday.

Shikhar Dhawan makes a comeback to the limited-overs squad after recovering from a thumb fracture, veteran keeper-batsman Wriddhiman Saha is back in the Test squad for the first time since January 2018 after injury problems, while Jasprit Bumrah and Hardik Pandya have been rested.

Among other notable decisions taken was the axing of Dinesh Karthik from the ODI squad while a number of youngsters, on expected lines, were rewarded for their performances with the India A squad.

Also Read: The full squads for ODIs, T20Is and Tests

Going by the chief selector’s views, by making himself unavailable for the Caribbean tour, Dhoni may well have saved himself the embarrassment of being dropped. While Prasad refrained from making a blunt statement on Dhoni’s retirement, he was categorical that Pant was the first-choice in all formats.

“He (Dhoni) has expressed his unavailability, but having said that we had certain roadmap and plans till the World Cup. Post World Cup, we have laid down a few more plans and we thought of giving as many opportunities as possible to Rishabh Pant and groom him; so this is our plan right now,” said Prasad.

Dhoni will face the same situation ahead of the home series against South Africa, when the selectors will next meet to pick the squad. If Pant does well against West Indies, it could mean the end of the road for the former India captain.

Young batsman Shubman Gill missed out while Shreyas Iyer, Manish Pandey, Navdeep Saini, Khaleel Ahmed, Rahul Chahar, Deepak Chahar and Washington Sundar were the new names announced by Prasad after the first selection committee meeting convened as per the new constitution where only the cricketers were present, including captain Virat Kohli.

Quite a few gaps remain, though. Mayank Agarwal was picked out of nowhere for the World Cup when a replacement was needed, and without getting a chance he has been dumped. Despite being among the most promising talents, Gill doesn’t find himself in any of the teams while Kedar Jadhav has been retained in the ODI squad despite a below par World Cup where he was eventually dropped from the playing XI.

In terms of the roadmap for future, Kedar doesn’t fit in. He will be 38 when the next one-day World Cup is held.

Two days earlier, the player himself had said he was not satisfied with his performance (80 runs in five innings) at the World Cup. “It didn’t go well personally for me, but that’s life, you learn and improve,” Jadhav had said in Chennai.

Prasad said while the selectors have kept faith in Jadhav for the present, they are looking to find back-ups.

“Kedar has not done anything wrong for his non-selection. We are also getting our back-ups ready. We will monitor his progress and see that by then the back-ups (are ready). We have slowly brought in some guys into the T20 team; let’s see how those guys progress in the ODI side.”

To stabilise the middle-order, India’s weak-link in the World Cup, the selectors are banking on Manish Pandey, Shreyas Iyer, Pant and Jadhav. With Dhawan back, Rahul will also be pushed back to No. 4.

Prasad gave an assurance the batsmen will be given a long run. “I am sure you have seen from the way we have selected the team that we are looking ahead. We have taken India ‘A’ performances into consideration. The performances of Manish Pandey and Shreyas Iyer have been phenomenal, even Saini’s.”

Some members of the selection committee were for sending a full-strength squad as it was felt a month’s break after the World Cup was enough, but based their decision to rest Bumrah after receiving the report on workload management from the team’s fitness experts.

“Looking at the itinerary, that is how the team management, which includes the trainer, physio, captain and coach, sits and works on workload management. Prior to the selection of any team, they give us the list and based on that we go ahead with the selections,” said Prasad.

From here on, the selectors will also be looking to build the team for next year’s Twenty20 World Cup. The three games against a formidable West Indies side will be a good test.

They have looked at IPL performances in picking the Chahar cousins Rahul and Deepak and Washington Sundar to bolster the bowling attack. Leg-spinner Rahul did well for Mumbai Indians and Deepak was incisive with the new ball for Chennai Super Kings.