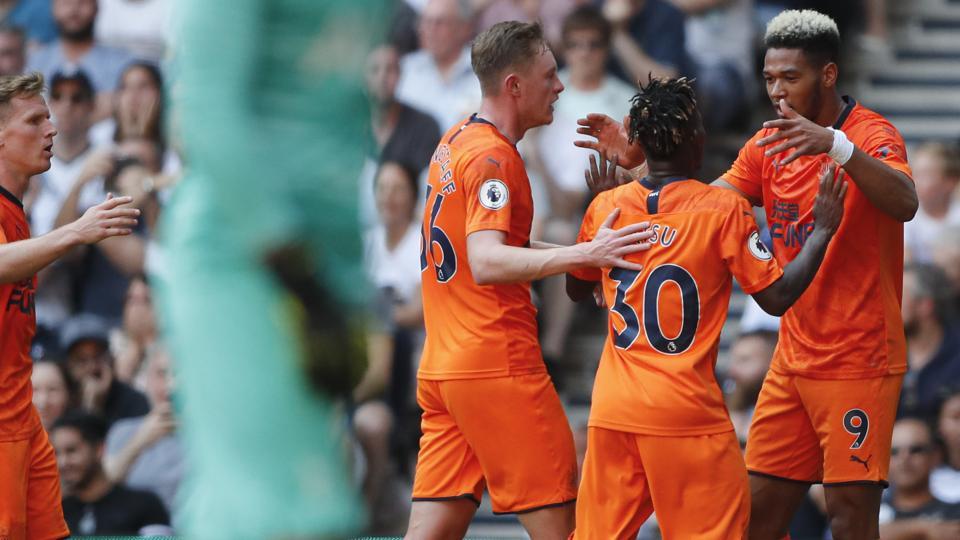 Tottenham were involved in more VAR controversy as this time Mauricio Pochettino’s men were denied a late penalty and Newcastle held on for a shock 1-0 win away to the Champions League finalists on Sunday.

Joelinton’s first goal for the Magpies gave Steve Bruce’s men a first-half lead to defend and they did so manfully to pick up their first points of the season.

Spurs were saved by VAR to claim a fortunate 2-2 draw away to Manchester City last weekend as the champions had a late goal ruled out, just as they did in a dramatic Champions League quarter-final between the pair last season.

However, it was Tottenham’s turn to feel aggrieved as Harry Kane was felled by Jamaal Lascelles inside the area, but VAR did not overturn Mike Dean’s initial decision to wave play on.

Newcastle had suffered a terrible start to the season with defeats by Arsenal and Norwich, the latter of which forced Bruce to cancel a day off for his players for extra training.

That work clearly paid off as a disciplined and dogged Newcastle frustrated a Spurs side lacking in invention without Christian Eriksen — who was again left on the bench with his future at the club in question.

Tottenham dominated possession early on as expected, but it was Hugo Lloris who was forced to make the first significant save as the French number one acrobatically tipped over Sean Longstaff’s rising drive.

Newcastle fans continued to voice their displeasure with Mike Ashley’s ownership of the club for a lack of investment that contributed to Rafael Benitez not extending his contract to remain in charge this season.

But there was finally some reward for the club-record £40 million ($49 million) splashed on Joelinton as the Brazilian striker pounced on some awful defending from Davinson Sanchez to fired Newcastle in front on 27 minutes.

Even going behind could not rouse Spurs into a response.

Son Heung-min was making his first appearance of the season after serving a suspension hanging over from a red card last season and the South Korea was far from his brilliant best.

Son did at least force Martin Dubravka into a save from a narrow angle and Lucas Moura should have done better when the Slovakian flapped at a Kane cross with the last action of the first half.

Spurs continued to probe without much cutting edge after the break and Eriksen was eventually called for, along with Giovani Lo Celso for his home debut just after the hour mark.

Eriksen’s contract expires at the end of the season, meaning Tottenham will have to sell him before the transfer window closes across Europe on September 2 or run the risk he leaves the club for free next summer.

Just like on the opening day of the season when the Dane helped overturn a surprise 1-0 deficit against Aston Villa, Eriksen’s introduction sparked Spurs into life.

Kane should have had a chance to level from the spot when he was wiped out by Lascelles as the defender stumbled in the box.

Referee Dean turned down the appeals and the decision was not overturned after a VAR review as it was deemed not a “clear and obvious error”.

However, the Premier League’s high bar to not overturn referees’ original decisions will be scrutinised as it seemed a certain penalty.

Moments later, Lucas spurned the hosts’ best opening of the game by firing over Moussa Sissoko’s low cross and Newcastle saw off a bombardment during six minutes of stoppage time for a vital victory.